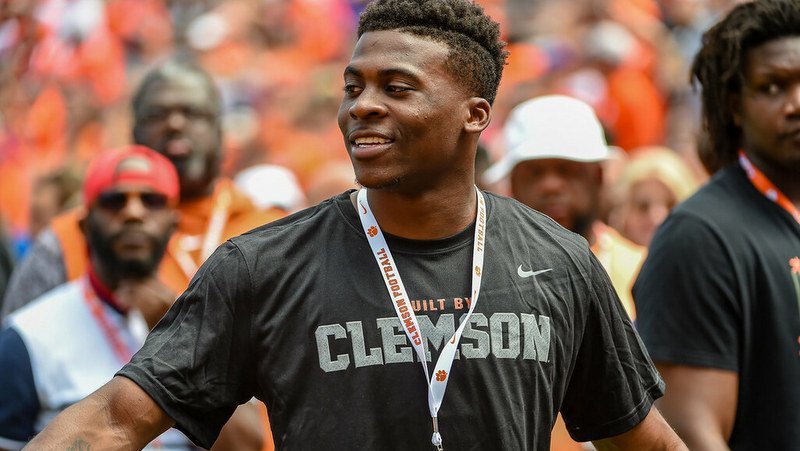 Mikey Dukes moves in at Clemson in late June

Mikey Dukes is used to leading his team on deep postseason runs and he’s hopeful he can be a part of a run to the College Football Playoff for Clemson in 2019.

Dukes is the running back out of Charleston (SC) First Baptist School that committed to Clemson last February. The in-state standout turned down offers from Syracuse, South Carolina, Virginia Tech, Virginia and Wake Forest, among others, to play for Clemson – his dream school.

Dukes will move in on June 23rd, and he’s spent most of the spring preparing for that move.

“I really have been working and preparing myself for the transition from high school to Clemson,” Dukes told TigerNet. “Coach (Tony) Elliott and Coach (Dabo) Swinney have been telling me to just enjoy my time here and the remaining time I have here with my family and friends before I move up there on June 23rd. That is really it. I am still working out. My parents help me out with the mental part and they kind of help me get my head out of the window. I have been anxious about going up there, so they have been helping me.”

Dukes said he’s bulked up (6-0, 188), and is ready to contribute. The Tigers have just two scholarship running backs on campus currently, and Dukes will join fellow 2019 commit Chez Mellusi in fall camp. However, Dukes said the recent departure of Tavien Feaster hasn’t changed his plans.

“Coach Elliott has always been preaching that to me, that I can come in and play right away,” Dukes said. “He has always told me to be ready to come in and be prepared for that. He has helped me a lot with that.”

Dukes will wear a different number at Clemson.

As a senior, he carried the ball 188 times for 2,030 yards (10.8 yards per attempt) with 29 touchdowns on the ground. The 5-foot-11, 190-pound playmaker won the Lonnie Robinson Memorial Award as SCISA Player of the Year and shared All-Lowcountry Player of the Year honors.

After leading First Baptist to SCISA AA titles in 2016 and 2017, Dukes helped the team to an 11-2 record and a state runner-up finish as a senior in 2018 in the school’s first season in AAA. He notched 335 rushing yards in his penultimate high school game, a win over Porter-Gaud in the SCISA AAA semifinals.

He wants even better results at Clemson.

What is he most looking forward to at Clemson?

“I would say getting up there and getting to work,” Dukes said. “I want to see all of my teammates and brothers and build relationships with them, and the other people on the campus. Just get started with my college experience.”

He is also looking forward to his first trip down Clemson’s iconic hill.

“I am just hoping I don't fall. I am kind of scared,” Dukes said. “But I can't wait to run down it and see the environment and the people going crazy. That should be fun.”