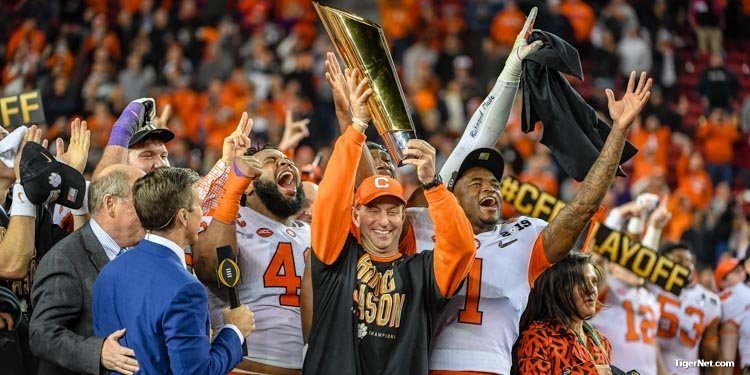 The Christmas holiday is as much about memories as it is about the present. The sight of a Christmas tree crowded with presents brings back of rush of pleasant thoughts from bygone times for many people, and I am no exception. Now, however, many of my Christmas memories involve time spent with the Tigers at some far-flung bowl site in pursuit of another title.

I grew up in what was, for the most part, a non-sporting family. My mother didn’t care for sports, my dad only liked boxing, my oldest brother was a Rhodes Scholar who studied at Oxford and the older brother closest in age to me was more concerned with motors than anything that had to do with a ball or puck.

I was born a little different than those guys. My grandfather on my mother’s side was a tremendous athlete and was the manager for many of the mill league baseball teams around the upstate. I never met him – he passed away 21 years before I was born – but I heard all the stories about his swimming and diving and love of baseball and football. As my mom would tell it, he was the one that always had the bag with the gloves and bats and balls, and I am sure he would love to know that I spent a good portion of my life playing ball all over the country. It’s in my genes.

I was the baby of the family – my sister was almost 14 years older than me – and when she got married I was just five or six. She married a guy who was the biggest sports fan you’ve ever seen, and it wasn’t long before I told everyone that he wasn’t my brother-in-law, he was simply my brother.

He bought me my first football and jersey. That set in motion a chain of Christmas where he supplied everything I desired from a sport standpoint. When we lived in Missouri, he bought me a St. Louis Cardinals (football) jacket and hat. They lived in Dallas at the time and he supplied me with Dallas Cowboys stuff and Texas Rangers gear and I had posters of everybody from Ed “Too Tall” Jones to Roger Staubach to Tony Dorsett to Randy White. My dad began to understand my love for sports, and on Halloween Night in 1977 he asked if I wanted to go trick-or-treating or ride the 60 miles to St. Louis to see the Cardinals and Giants on Monday Night Football.

That was a no-brainer – I watched the Cardinals win 28-0 behind Jim Hart and Terry Metcalfe. (I still remember the coaches were Don Coryell and John McVay and the Giants QB was Joe Pisarcik. Larry Csonka played on that team. And the Cardinals got a touchdown from OL Conrad Dobler, who recovered a fumble in the endzone).

My brother (in-law) allowed me to spend part of my summers with them and he took me to see the Rangers and Yankees (I still have a Beat the Yankees Hankee they gave out that night), and I was thrilled when Reggie Jackson would have a conversation with us between innings.

When my parents moved back to South Carolina I didn’t know much about Clemson. The kids at my new school wore Clemson shirts, but I was clueless on what they meant. And then one Saturday I was riding around with my dad and we turned the radio dial and I heard the golden tones of legendary broadcaster Jim Phillips. I was hooked. He was as much a part of my fall Saturday afternoons as cartoons were for children in the mornings. During the Fifth Quarter Show, I would sit and listen to reports from what sounded like the magical places of Penn State, Notre Dame, Southern Cal, Nebraska, Texas, and Alabama.

Heck, I had never been to a Clemson game, much less places like Notre Dame. To a kid just starting his teens, those were places that I could only dream of visiting. I had a Sunday tradition during football season – I would get a blanket and lay on the floor in front of the TV and watch as much NFL football as I could. There were some Saturday afternoons where I watched college football, to be sure, but I wasn’t quite as hooked on the college game as I was the pro game.

Then came the holiday season of 1981 and all anyone could talk about was Clemson and Nebraska in the National Championship. I gathered my blanket and pillow that New Year’s night and for the first time in my life watched the Tigers play on TV. I was hooked immediately and I lived and died with each first down and score.

I didn’t sleep that night. Names like Perry Tuttle and Homer Jordan resonated with me. Heck, I walked into Clemson’s bowl practice the other day and the first person I saw was Homer Jordan and for a few seconds, I was a kid clutching a pillow as the ball settled into Tuttle’s hands for the touchdown.

Since then, I’ve covered big bowl games and College Football Playoffs and I’ve watched in wonder as the confetti fell a few minutes after Watson to Renfrow. There have been big stadiums and small stadiums and players and coaches who have each left an indelible sports footprint on my mind.

But this time of year….it’s special. Nikki and I spent Christmas in 2014 alone at the Russell Athletic Bowl. We were away from friends and families but we didn’t care. We were doing something we loved and we had each other and that was enough. The gift we received was watching two young offensive coordinators beat the brakes off Oklahoma.

Each Christmas, people ask me what I want for Christmas and it’s hard to answer. I have a front-row seat for this incredible journey Clemson has been on. There are times when I wish I could go back and let that little kid in Missouri know that Christmas dreams can come true.

Merry Christmas Clemson Nation. Thank you for reading this and thank you for being a part of this incredible journey with us. May all your dreams and wishes come true.