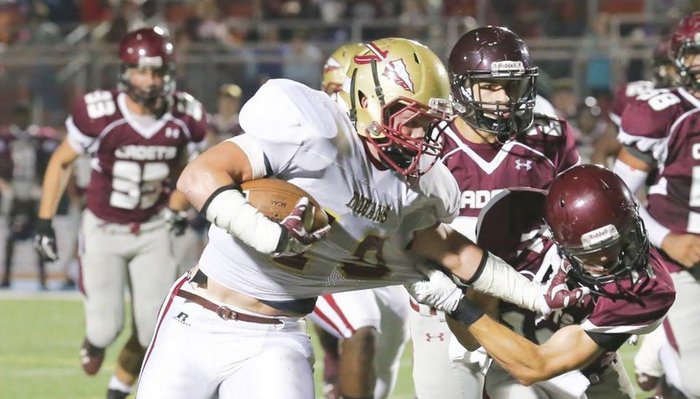 McBride also played running back in the Indians' offense

Nate McBride
Outside Linebacker
6-2, 220
Vidalia, GA
View Full Profile ’s recruitment is just getting started, but the 2017 prospect already has offers from several of the nation’s top programs and Clemson added its name to the list during Saturday’s junior day visit.

The 6-2, 220-pound Vidalia (GA) linebacker added Clemson to a list that consists of Alabama, Auburn, Georgia, Georgia Tech, Ole Miss, Penn State and South Carolina during his visit this past weekend.

Brent Venables
Def. Coordinator / Linebackers
View Full Profile verbally offered McBride Saturday afternoon and McBride told TigerNet Sunday morning that he was excited to get the offer from such a highly-regarded coach.

“It was awesome. I really think a lot of him and the program,” McBride told TigerNet. “As soon as he [Venables] did it I looked at my dad and started smiling.”

McBride was one of several recruits on campus for the junior day activities, which included watching Clemson’s practice inside Death Valley and touring the facilities. After the visit concluded, he said that Clemson is at or near the top of his list.

“I really think after yesterday Clemson is close to the top as well as a lot of the other ones,” McBride said. “They are all great. I'm just blessed so much and I want all of them. But Clemson is a great school.”

What stood out to the four-star prospect?

“I really liked the indoor complex and of course the offer,” he said.

Playing for a coach like Venables is also something that McBride said he can see himself doing in the future.

“He is a great coach and a great man,” he said. “I have a lot of respect for him and I would like to play for a coach like him.”

McBride played on both offense and defense in 2014 racking up 128 tackles and three interceptions as a linebacker and rushing for over 600 yards – including a three carry day for 106 yards – as a running back in the Indian’s offense.