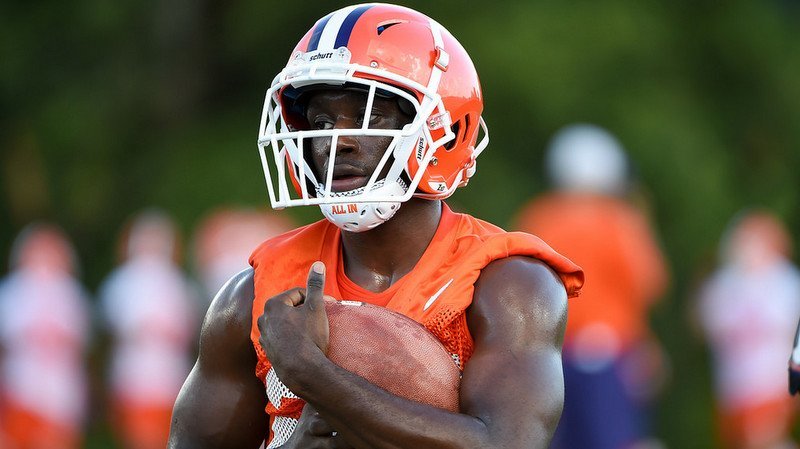 CLEMSON – Tony Elliott’s job is to get running back Lyn-J Dixon prepared for the rigors of a college football season, and the former 4-star made a good first impression in last Friday’s camp-opening practice.

Dixon was the lone running back signee for the Tigers in the 2018 recruiting class, a former 4-star out of Butler County (GA) Taylor that scored 73 touchdowns in his high school career. Wearing the No. 23 worn recently by Andre Ellington, Dixon made sure Elliott took notice.

"Today validated what I thought I saw on tape when we evaluated him,” Elliott said. “Very good first step. Natural runner. He doesn't quite understand where we are trying to run the ball yet, but he sees the whole field and if he sees green grass then he'll be able to get to it. He caught the ball well today, too.”

Veteran Tavien Feaster will be limited during the early portion of camp, meaning Dixon took some reps with the second-team. Elliott said that Dixon made his share of mistakes but also had his wow moments.

“He’s a lot like Travis (Etienne) when Travis came in,” Elliott said. “He doesn’t quite understand where we’re trying to run the ball. But he sees the whole field, and if he sees green grass he’s going to be able to get to it, and I thought he moved around well and caught the ball well, too.

"He's swimming still, just like any freshman would be at that position. It's a lot (during) day one install. He's gotta figure out how to line up, the right footwork, where I'm supposed to go from a blocking standpoint, then I've got to pass protect.”

Elliott said Dixon impressed not only physically, but mentally.

“I tell you what, by the time we got on the field, I was pleased with his comprehension,” Elliott said. “Obviously, in the meeting before practice it's going fast, I'm throwing stuff at him to get him up to speed. When he was on the field and actually able to do it, I was very pleased with his comprehension. When he gets the ball in his hands, we all know that he's a dynamic athlete.

"There was one run that caught my attention, and it was like, OK he's moving. And then he bounced one to the outside, and he was wrong, kind of like Travis would be wrong a lot in going outside, but Lyn-J was able to put it in gear and get there. Watching the way he strides and glides, you can tell he can run."