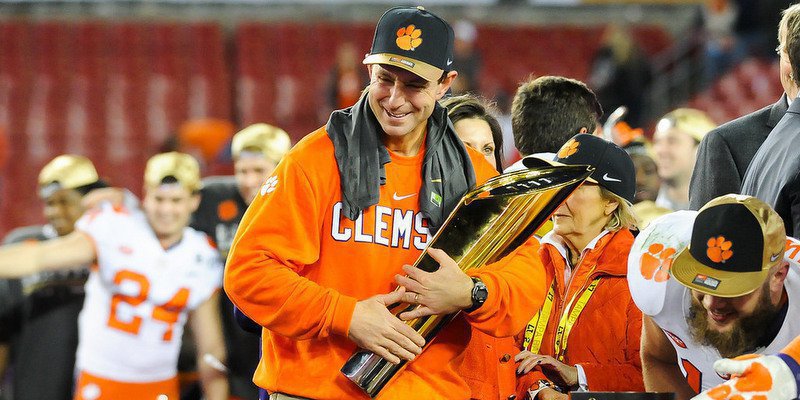 Clemson defeated Alabama 35-31 on that magical night in early in January in Tampa’s Raymond James Stadium, and as the final second ticked off the clock and the realization hit home that the title was secure two words popped into Swinney’s head.

“At the beginning of every year, I make every player come up with a word that applies to them. It's something they can hang their hat on all year long, and something they can focus on,” Swinney told Tim Brando. “Some guys it's consistency and some guys it's knowledge. And I have a word every year. It's interesting that my word and Deshaun's word were on display that night in the National Championship Game.”

The night before the game, the Tigers held their final walkthrough on the practice fields of the NFL’s Tampa Bay Buccaneers. As the practice drew to a close, Swinney looked over the trees and saw Raymond James Stadium – the site of the game – sitting just a few blocks away.

At that moment, he knew his team was going to win. He saw it, plain as day. And he knew why they were going to win. 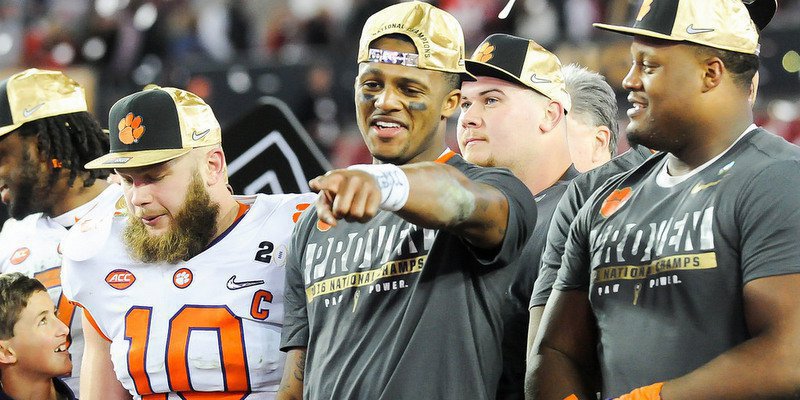 Alabama jumped out to the lead at the half, but Clemson clawed back to take a 31-28 lead late in the fourth quarter. However, Alabama scored a go-ahead touchdown with 2:07 left on the clock, and that’s when Watson's word came into play.

“And Deshaun - back in August I asked him what his word was going to be for the year,” Swinney said. “He said legendary. I was like, whoo, four syllables. Wow. Legendary. Man, that is a great word Deshaun. I like it. And this is August. Now fast forward and they score and he's getting ready to take the field and he's strapping his helmet up, and we go over there and he looks at the guys, and he says, 'Let's go be legendary, boys.' Last thing he said.”

Watson was electric on that last drive, and he capped off his historic Clemson career with a touchdown toss to Hunter Renfrow that put Clemson ahead 35-31 and brought a title back to the Upstate.

“And if you watch that last drive, it was legendary,” Swinney said. “And it's something that you can't script any better. Especially for Deshaun Watson. He was already legendary to me, but he solidified that to me with that drive.”