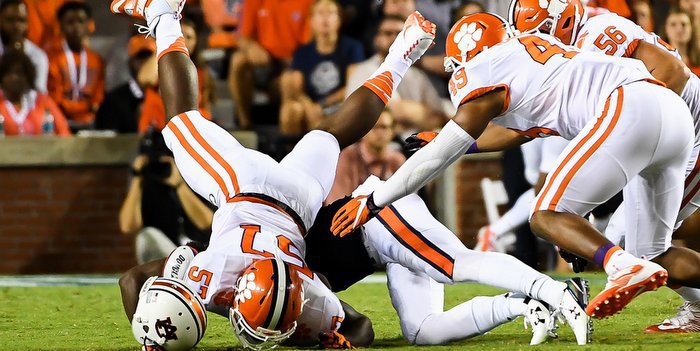 Lamar takes the helmet off an Auburn player Saturday night

CLEMSON – Tre Lamar had butterflies before taking the field at Auburn last Saturday, but he’s even more nervous about the daunting task staring him in the face this Saturday: making it down The Hill in one piece.

Clemson’s veteran players have made sure that Lamar has heard all of the horror stories about players tripping, stumbling and bumbling their way down the famous incline, and Lamar told the media Tuesday in the WestZone that he’s considering making a few practice runs before the big day.

“They (the veterans) told me it's awesome. They told me not to fall down the hill,” Lamar said with a smile. “I am excited to run down it in front of all the fans. I am sure it will be a packed house, and it will be one of the most exciting things I've done. I might need to take a couple of practice runs. I've only got the one from the spring game, so I've got to hope I don't trip and embarrass myself on TV, so we'll see.”

“I definitely had butterflies, with 90,000 fans out there at night,” he said. “I've waited for something like that my whole life. I definitely had some butterflies, but it was great to get on the field. It was exhilarating. It was good. I knew I would get in on some goal line stuff and heavy personnel-type things. I didn't know if I was going to get reps at middle linebacker, so to get some out there was awesome.”

Lamar was one of four true freshmen that played snaps Saturday, and he said the process of going from high school star to backup can be humbling.

“You definitely have to humble yourself and come in here ready to learn and ready to learn from guys older than you because they are willing to help you,” he said. “I had to humble myself and learn from the guys in front of me, and it's been working out. Everybody is a little disappointed that they didn't get out there this week. Everybody has been working hard. I know the freshmen are disappointed. Some people have to get right mentally. I think everyone is talented enough to get on the field. They just have to know what they have to do.”

“Ben, Kendall, and Dorian - all three of them have been helping me out with plays,” Lamar said. “Stuff like lining up in the right spots, knowing personnel and stuff like that. They have been mentoring me and helping me a lot. There is a learning curve, but coming in early in January really helped me out. Going through the spring and getting used to the plays and knowing what to do. In August, I could really focus on different teams and knowing their personnel and what they like to do and not just learning the basic stuff and what I have to do.”

Next up for Lamar is a trip down the hill and the chance to experience Death Valley on game day as a player, and that’s something he’s looking forward to being a part of.

“Everyone plays harder on game day,” he said. “You get amped up, you see the crowd, you hear the band playing, and you get excited. The intensity goes up, but it goes up for everybody. It feels different, but you are on a different level, too.”