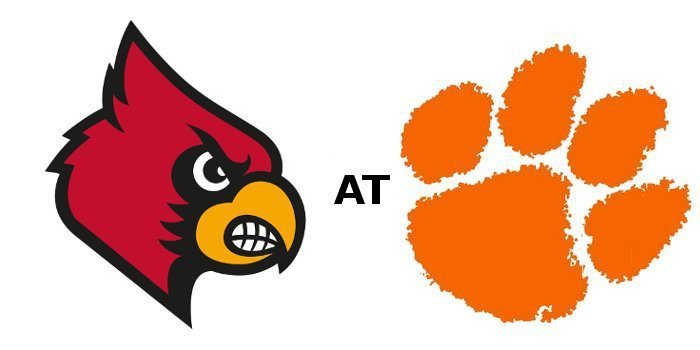 Clemson's 77-16 win over Louisville is the 2nd-largest in a conference game in ACC history.

The Tigers have as many 60-point wins this season as there had been in the first 65 seasons since the ACC was founded. pic.twitter.com/VPw2Mr4Enp

The record from one Clemson great, @D_Freeman55 to another in Mitch. #TheUnion https://t.co/PCuGzjXCuQ

Coach Caldwell is the best in the business. Not only is he the best coach, but one of the best people. Congratulations to my guy, Mitch. https://t.co/DGaV5VGJ4G

That look says it all. Dabo Swinney dials up a touchdown for his son Will as Clemson pours it on against Louisville. pic.twitter.com/JZpAXYH92P

Are we going to hit the century mark today? #GoTigers

Clemson has scored at least 70 points against an ACC opponent for the 2nd time in school history. They scored 82 points vs Wake Forest in 1981.

This is the 6th time in ACC history that a team has scored 70 points in a conference game. pic.twitter.com/VkKwWyumhE

They've reached that mark against an ACC opponent for the second time in program history, joining the school’s 82-point output against Wake Forest on Oct. 31, 1981.

what Clemson and Alabama are doing this year is like if the NBA Dunk Contest was a year-long competition.

I move we cancel the playoff and have Alabama and Clemson play a best of three instead.

I don’t know how Bobby Petrino doesn’t say something along the same lines after today.

Clemson is just breaking people’s will on a weekly basis.

BrandonRink®
2:46 PM
Louisville answers the Clemson TD with a 93-yard kickoff TD return (a first this season and stretching back to 2015). The extra point is blocked and Clemson leads 63-9,:54 3rd.

BrandonRink®
2:43 PM
After Louisville and Clemson fumbled all in one play, Chase Brice takes advantage of the extra opportunity by dropping a bomb of 60-yard TD pass to Justyn Ross. 63-3 Clemson, 1:07 3rd.

DavidHood®
2:37 PM
Since halftime against Cuse, Clemson has outscored its opponents 239-30.

Clemson has now scored 50 points in consecutive games for the first time since 2015 against Miami (58) and NC State (56).

BrandonRink®
2:34 PM
Clemson just ran a lateral to Mitch Hyatt on the goal line. It did not end well, but points for creativity. Next play is a TD pass to Trevion Thompson and Clemson leads 56-3, 3:50 3rd.

BrandonRink®
2:28 PM
Adam Choice not going down easily and carries it 30 yards into the Louisville red zone. Impressive run.

BrandonRink®
2:27 PM
Chase Brice enters the game for Clemson with 6:28 left in the third quarter and a 49-3 Tigers lead.

BrandonRink®
2:26 PM
Second targeting call of the game on a punt, this time on Louisville. Looks pretty clear going into review.

Tanner Muse has picked off the opponent in back-to-back games while Isaiah Simmons's pick 6?? extended Clemson's streak to 17 games with a takeaway on defense #ALLIN ?? pic.twitter.com/6LijkrDxfC

Cmon man! ?? this is something else! History right in front of our eyes

Message was edited by: BrandonRink®

BrandonRink®
2:10 PM
Fridge package back in on second and goal from the 2 and the crowd gets pumped...and Dexter Lawrence punches in the score.

BrandonRink®
2:06 PM
Outstanding play in space by K'Von Wallace for the TFL on UofL's Pass on the last Louisville drive. Cardinals only go backward and have to punt to start the second half. Clemson takes over at its 42.

Big day for these three with a TD each for Travis Etienne and Amari Rodgers and Mitch Hyatt becoming #Clemson’s all-time snaps leader.

Message was edited by: BrandonRink®

BrandonRink®
1:49 PM
That didn't end well for that coach.

Man that was a beautifully designed play and wonderfully executed! #pouriton

BrandonRink®
1:39 PM
Trevor Lawrence throws his second TD pass of the game to put Clemson up 35-3, in a third TD connection to Amari Rodgers in the last two games. Lawrence has multiple TD passes in five games this season.

With that play, the record books have been rewritten. Congratulations to Mitch Hyatt, the most versed ?? in Clemson football history! #ALLIN pic.twitter.com/PvFOV5NQwK

BrandonRink®
1:32 PM
Outstanding tackle from Denzel Johnson to force the punt. Showing some of the depth Clemson has developed in he secondary.

BrandonRink®
1:29 PM
Clemson grabs its third sack of the game but Trevor Lawrence turns it back over with a throw into a double-coverage to Tee Higgins. 4:01 to go in the first half and the Cardinals take over at their 14.

BrandonRink®
1:21 PM
After a tough sequence for Clemson, Louisville takes over at its 45. Chance to make this game a little closer than you would think from how it started. Clemson defense out there with a mix of veterans and backups.

DavidHood®
1:20 PM
So the offensive player lowers his head, the defensive player turns his shoulder, the helmets hit and its targeting. Got it. Gotta appreciate protecting players but the rule is out of control

BrandonRink®
1:17 PM
After the review, the targeting call on A.J. Terrell stands. Terrell is ejected.

BrandonRink®
1:12 PM
A.J. Terrell's hard hit on the punt coverage is flagged for targeting. Play will be reviewed.

BrandonRink®
1:11 PM
Klofdor said:
Why is Brice wearing a knitted black vest on the sideline? I've seen this before - it must have some significance.

I think it just makes him stand out when helping signal plays/communicate on field.

#Clemson defense is in charge and Isaiah Simmons had plenty to celebrate with his first career INT and pick-six. pic.twitter.com/r9cCryWelb