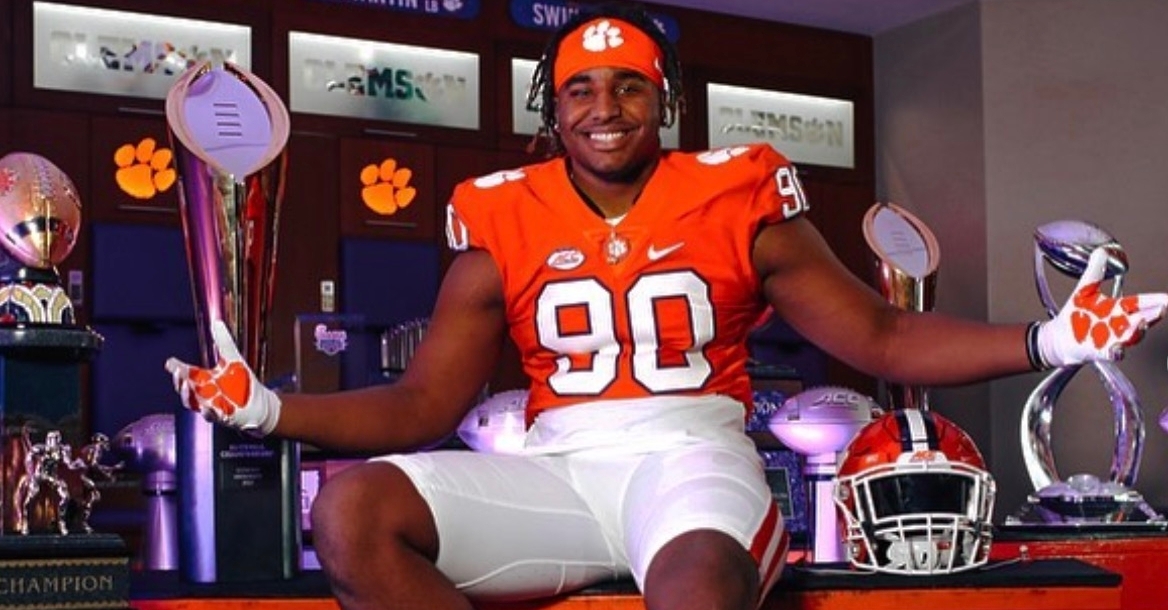 Foreman committed to Clemson after a January visit.

Clemson is still in it with the nation’s top player.

Defensive end Korey Foreman is a 5-star out of Corona (CA) Centennial who was once committed to Clemson. Foreman de-committed from the Tigers during the spring after he decided he wanted to take visits, and Clemson quickly pounced and landed 4-star defensive end Zaire Patterson out of Winston-Salem (NC) Winston-Salem Prep.

With an NCAA-mandated dead period in place, top recruits are organizing their own social visits to some schools, and Foreman is taking visits because California isn’t playing high school football this fall.

Two weeks ago Foreman and his father flew to Atlanta and then drove over the Athens to visit Georgia again. There Foreman met up with his close friend, fellow 5-star Maason Smith of Houma, LA, and others in a gathering organized by Bulldogs quarterback commitment Brock Vandagriff.

“When I was at Georgia, it was a fun experience,” Foreman said. “I was with some guys, lot of commits. It was more me being around the setting of everything along with my dad. I wasn’t able to check out any facilities or anything like that. I’d been to Georgia, so I know what the facilities look like except for the new weight room they are installing.”

Foreman thought about making the short trip up I-85 for a quick visit to Clemson but said, “I was talking to my dad about it, but we didn’t have enough gas money.”

But Foreman and his dad are coming back to the Southeast this weekend to visit LSU where he no doubt will reconnect with his pal Maason, and the two can continue their conversations about going to the same school. LSU and Georgia are on Foreman’s published short list along with Clemson, Southern Cal, Alabama, Howard and Oregon.

Clemson has taken commitments from other defensive ends for the 2021 class, but the Tigers haven’t cashed out in the Foreman sweepstakes, They may be taking the low-key approach, but the desire to have him in the program is still there.

Clemson defensive ends coach Todd Bates has been, and continues to be Clemson’s lead recruiter for Foreman. He did the hard sell job earlier, and he got the commitment. That approach no longer is necessary.

“Clemson still has a place in my heart,” Foreman continued, adding that he’s not talked with Bates about the off-campus unofficial visit, but he’d like to take one there. “I don’t have a top five (schools list) yet, but when I do, they still are in it. Nothing has changed.”

Foreman said he’s not sure when he’ll name a top five, and he’d like to take official visits to those five if-and-when the NCAA lifts the dead period. He will be an early signee.

Foreman said he is participating in a full-pad training camp at a prep school he attended in the eighth grade since he has no high school season this fall.