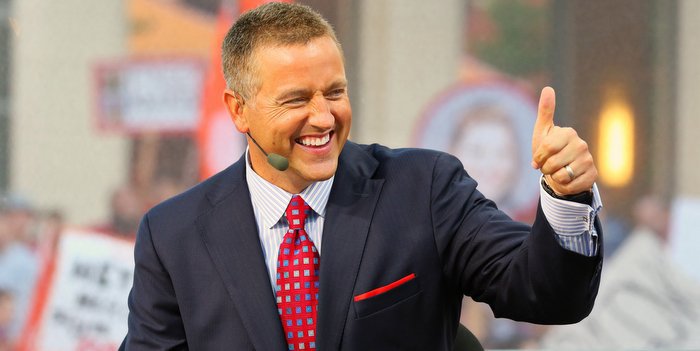 Herbstreit says the Tigers have a tougher schedule this season

CLEMSON – ESPN college football analyst Kirk Herbstreit has long been a fan of what head coach Dabo Swinney is building at Clemson and called last January’s dramatic win over Alabama in the National Championship game one of the best games he’s ever seen.

However, Herbstreit thinks that even though the Clemson brand has never been hotter, this season will be more of a challenge for the Tigers, especially without playmakers like Deshaun Watson, Wayne Gallman, Mike Williams and Jordan Leggett.

TigerNet spoke with Herbstreit Wednesday afternoon, and Herbstreit said that while he thinks Clemson will still be among the nation’s best, he thinks Watson might be too much to replace.

“No, I don’t think it’s necessarily a transition year,” Herbstreit said. “Let’s face it, you get a quarterback like Deshaun Watson come through the program - and I love Tajh Boyd, and Tajh Boyd was a bad man when he played on that offense - but Deshaun Watson just did a few different things that you just don’t see very many quarterbacks do.

“So, I’m not going to say you’re never going to have another Deshaun Watson. But the year after Deshaun Watson leaves, and you’re looking around to see who might be the next guy, and it sounds like it’s going to be Kelly Bryant. You look at the game experience that Kelly has, and I think he attempted maybe nine passes last year. When you watch him throw, yeah, he’s got a good arm, he can run around, but until you see him play, you just don’t know what he can do. Can he be a Tajh Boyd? Can he be able to do some things that Deshaun did?”

Herbstreit says even without the above-mentioned playmakers, the Tigers are still loaded.

Herbstreit says the Tigers have a tougher schedule this season"

“I think if you look around him, they’ve got athletes everywhere,” he said. “Clemson’s recruiting now, the last probably five years, at a level that very few teams are in the whole country. It’s only going to get stronger with Dabo, the new facility. The brand right now has never been hotter. They’re capitalizing on it.”

Herbstreit then reiterated that he thinks Clemson isn’t in rebuild mode.

“I don’t think it’s necessarily a transition year,” he said. “I just think when you lose a player of that magnitude, and you take out Wayne Gallman, you take out Mike Williams, Jordan Leggett, that’s a lot of production to take away from an offense and expect the next group not to miss a beat.

“I still think they’re going to be productive because I think it’s an offense that allows them to be able to bring guys in and adjust to their strengths. I think their defense, as you said, their defensive line is probably as good as there is in the country.”

The schedule is tougher, and being the champs means the Tigers are everybody’s main targets.

“I think you’re dealing with being that team that won last year with the big target that everybody wants a piece of,” Herbstreit said. “The schedule I think is tougher with Auburn – they’re at Louisville, they’re at Virginia Tech this year. Even a game like at N.C. State, I just think I would not want to be quoted as saying it’s a transition year. I just think it’s going to be more of a challenge, obviously, for them this year. But I still think they’re a team that could still go out there and win 11 or 12 games this year.”