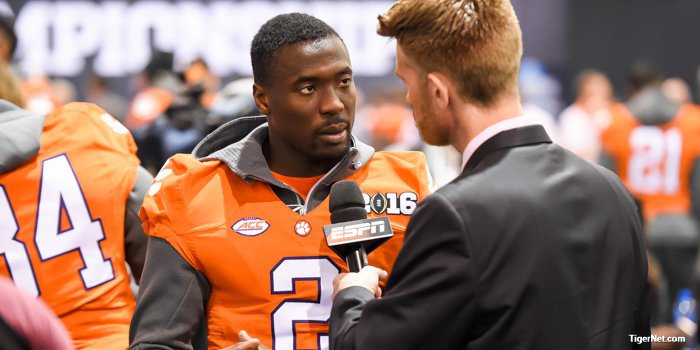 NFL Draft analyst Mel Kiper, Jr., held his final conference call with the media before this week’s NFL Scouting Combine, and with eight former players in attendance Clemson was a hot topic.

The NFL Scouting Combine will be held at Lucas Oil Stadium in Indianapolis February 23-28.

Kiper started by saying that there are two big questions concerning cornerback Mackensie Alexander – how tall is he and how are his hands.

“Mackensie Alexander, I think the main thing is going to be how tall is he? These underclassmen you don't have accurate measurables except the couple that went to the Senior Bowl that graduated early,” Kiper said. “Is he 5-9, 5-10? What is he height-wise? He's a heck of a corner. Now, he had protection from the pass rush. He had (Vic) Beasley two years ago and this year he had (Kevin) Dodd and he had (Shaq) Lawson and that protected him. The quarterbacks stayed away from him as well, but he doesn't have an interception in his career. I think that is the thing. The ball skills he needs to show in workouts, combines are going to be important. I think he is late one, early two. I have him at Carolina at 30. He could be an early to mid-second at worst. Probably a late one or early two, after all is said and done. Between 25 and 40 is the range for Mackensie Alexander.”

“Kearse right now I think still is one of the top five to seven safeties,” Kiper said. “Karl Joseph (West Virginia) we have to see the medical on him. Vonn Bell from Ohio State is the number one safety. Darian Thompson, Boise State, has moved up. I have Kearse right now with a third round grade.”

Kiper sees linebacker B.J. Goodson as a late-round pickup for someone, along with former safety T.J. Green.

The most attention will be paid to defensive ends Lawson and Dodd, and Kiper says it’s hard to predict which player will get picked first.

“In terms of the two, that's a hard call. I think workouts are going to be important,” he said. “That's one thing I will be highlighting on SportsCenter on ESPN tomorrow that Dodd, Lawson battle because that is going to determine whether you are a mid-first round pick or maybe a late first round pick. I have Dodd going to Buffalo at 19. Lawson is going a little earlier to Atlanta at 17, but that is going to be contention upon workouts.

“I think if you look at the body of work you would go Lawson. If you just look at one year and certainly the way he played in the national championship game you would go Dodd. Lawson was hurt there early. Dodd was also going up against an offensive tackle that's not going to be an elite prospect from Alabama so that gave him an edge. I think workouts will determine that. That's a slim difference if any except Lawson has done it over the longer period where Dodd was a one year wonder. If Dodd has a significantly better workout, maybe Dodd goes ahead. If they are equal, I think you go with Lawson over Dodd because as I have said he has done it over a longer period of time.”