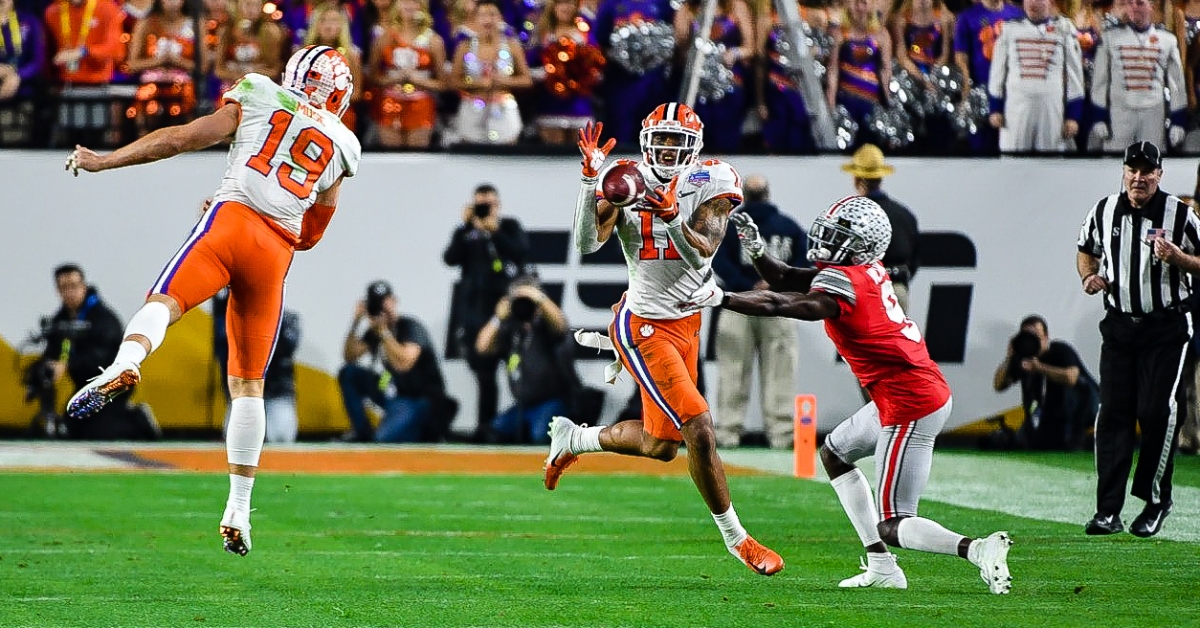 Simmons picks off Ohio St. in the Fiesta Bowl

The Butkus Award winner as the nation's top linebacker, Clemson’s Isaiah Simmons checks off every box of what NFL teams look for at the position in today’s game. Simmons possesses size, speed, length and toughness, a rare combination for a man his size.

Simmons has also played in big games and against the best competition in his Tiger career, participating in three College Football Playoffs and playing in two National Championship games. That makes Simmons the most NFL-ready player in the draft according to NFL draft analyst Mel Kiper.

Kiper says Simmons will go No. 4 overall to the New York Giants in his latest mock draft. He has LSU quarterback Joe Burrow going No. 1 overall to the Cincinnati Bengals, followed by Ohio State’s Chase Young to the Washington Redskins, and the Buckeyes’ Jeff Okudah to the Detroit Lions. Alabama quarterback Tua Tagovailoa rounded out the top five, going to the Miami Dolphins with the fifth overall pick.

Tale of the Tape

Bench: Did not bench

20-yard shuttle: Did not run

Simmons is listed as a linebacker, but as Clemson fans know, he lined up all over the field for the Tigers in 2019. There were times he rushed the passer, there were times he covered a tight end or receiver in the slot and there were times he played like a third safety. He led Clemson with 107 tackles, 16 tackles for loss and eight sacks last season.

Kiper said that the fourth pick is interesting because of the presence of Tagovailoa, meaning a team could trade up to make sure they draft the oft-injured Tide quarterback.

"This is another spot to watch for a trade," Kiper wrote in his mock draft. "If the Lions stay put and take Okudah, could a team jump in front of the Dolphins to snag Tagovailoa? Because I can't project trades here, I'll mock Simmons to the Giants. He's a phenomenal athlete who ran a 4.39 40-yard dash at 238 pounds, but he has great film from the past two seasons, too. He and free-agent addition Blake Martinez would really strengthen the G-Men's linebacker unit. General manager Dave Gettleman has to think about an offensive tackle here, too, with Mekhi Becton, Tristan Wirfs or Jedrick Wills Jr. as possibilities."

Another Clemson product that Kiper has going in the first round is receiver Tee Higgins, who he has going with the 19th overall pick to the Raiders, where he would join former Clemson teammate Hunter Renfrow.

“Tee Higgins, I would put in that group as well, to an extent. He ran pretty good at his pro day. It was one of the last pro days that happened,” Kiper said. “Obviously you would have liked to see him be a little more physical in those final two playoff games, but Higgins is probably right now to me at 4 (as far as receivers).”