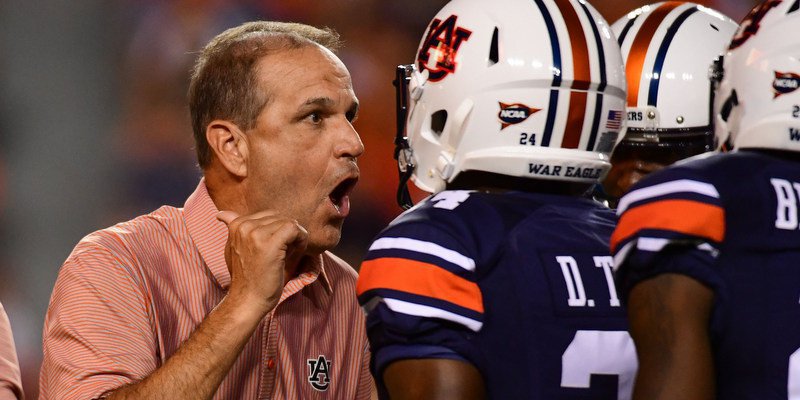 Steele and the Auburn defense held Clemson in check for much of last year's contest (Photo by Shanna Lockwood, USAT)

With Auburn’s warm-up game against Georgia Southern out of the way, Kevin Steele and the SEC Tigers’ defense is gearing up for a different animal with a trip to Clemson on the horizon.

Steele – Clemson’s former defensive coordinator – is preparing for his first trip back to Death Valley since he left Clemson in 2011 and he told the Auburn media that this year’s version of the Clemson offense is just as good as the unit that traveled to Jordan-Hare last season.

“We’ve got a great challenge this week, in that we have the reigning national champions at their place,” Steele told the Auburn media Sunday evening. “They’re a very, very talented football team. Very good up front in the offensive line. They’ve got a stable of running backs. Their receivers, they just keep feeding the system with their receivers. The quarterback is very, very talented. When you watch the game yesterday on video – I’m not saying (anything negative about) their old quarterback who was a first round draft pick and one of the best to play in modern time – but their quarterback is a very, very good football player and has a bright future in this game.

“They’re very well coached. They’re a good group of guys. They’ve got good players across the board. The thing about it is where we are, it will be pretty much like that every week for the rest of the year. It’s just the nature of the business at the level we play at.”

“He is (a lot like Watson). Physically looking, he’s a tall, slender, powerful build guy. He throws a very good ball and runs really well,” Steele said of Bryant.

And, he said Deon Cain is this year’s version of Mike Williams.

“I think he’s kind of taken the role of Mike Williams from last year. He’s a physical, powerful guy who can run and run fast. He’s a very, very good football player,” Steele said of Cain.

Coming off of a week where Auburn prepared for the triple-option attack, Steele said it shouldn’t be too big of a transition to Clemson’s offense.

Despite having the competition ramped up several notches, Steele referred back to his old saying that no game is bigger than another.

“Y’all have heard me say this before, I don’t make the schedule. I don’t care where we play, who we play, what time we play,” he said. “Let’s just get ready to play. Last year it was flipped over and it was the other. So you can say, is it harder to play a game where you’re physically against a team that’s going to be the national champion and you’re beat up with the physicality of the game and the number of snaps, doesn’t it wear you down with the number of snaps? Several years ago, I quit worrying about all of that stuff that’s in the peripheral. It only has an effect on it if you let it have an effect on it and we’re not going to let it have an effect on it.”