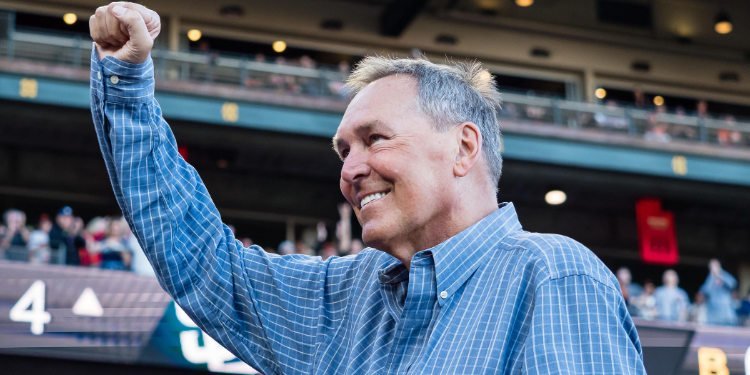 GREENVILLE – The relationship between Dwight Clark and Joe Bostic proves the Clemson family extends well beyond the years they spent at Clemson.

Clark and Bostic shared the field in Death Valley from 1975-’78, with Bostic at center and Clark as a tight end. Both would end up making a name for themselves at the next level, both would move on from Clemson and start new lives, but their friendship remained strong throughout the years. Clark went on to continue his football career with the San Francisco 49ers.

During the 1982 season, he led the NFL in receptions and made the Pro Bowl twice, in 1981 and 1982. One of Clark’s most memorable moments in the NFL was “The Catch” during the 1981 NFC playoffs against the Dallas Cowboys.

Clark made the daring leap and caught a six-yard pass from quarterback Joe Montana to give the 49er’s a 28-27 victory over the Cowboys in the NFC Championship allowing them to advance to Super Bowl XVI.

In March of 2017, Clark announced he had been diagnosed with ALS, also known as Lou Gehrig’s disease. Clark's condition would prevent him from accepting his induction Thursday night into the South Carolina Football Hall of Fame in person.

His dear friend and former teammate, Bostic, was there on his behalf.

“Well, there are two plays that I think of when I think of Dwight,” Bostic told TigerNet Thursday. “One is, ‘The Catch’ against the Dallas Cowboys. He also made a huge catch for us (Clemson) in 1978 against Maryland, helped us win the ACC championship, which was the first time we had won the ACC in like 10 years. He made that 63-yard catch and hauled tail and got us in the lead. Those are the two plays I remember about Dwight.”

The way Bostic goes on to describe Clark as a teammate shows the fond affection Bostic has for his friend and teammate.

“Dwight and I came in the same year, 1975. Dwight looked like he ought to be in Baywatch, before Baywatch was even started,” Bostic said. “He was a great teammate, he was a selfless guy. He wasn’t mad about not playing enough or not getting enough passes or whatever. He was just a great teammate and a great leader and set a really good example for a lot of players. I really admired Dwight. He’s a really good guy,” he said.

Clarks memorable characteristics didn’t stop on the field, according to Bostic.

“I tell people all the time that Dwight was the total package. Every guy wanted to be like him and every girl wanted to be with him. He’s was just a really good-looking guy and a really good person,” Bostic said.

“I saw this documentary the other day with Archie Manning, and he’s going to school for the first time at Ole Miss. He’s talking to his dad about what kind of class he should take. His dad says oh you’ll figure that out, what I want you to do more than anything is be a good guy. When he said that I automatically thought of Dwight. He’s just a good guy, a good teammate, a guy you could count on, very reliable. I have a lot of admiration for Dwight Clark.”

Clark’s most memorable football years were his professional ones, according to Bostic. His professional years contributed to his enshrinement into the South Carolina Football Hall of Fame.

“We have a bunch of guys that played in the 1978 team, and a bunch of those guys went on to play professional football for a long time. Personally, I think of all the guys on that team, Dwight Clark was the best professional player on that team. Very deserving of this. I was so happy when I heard he was going to enshrined. I wish I could see him receive his award but I feel very honored and humbled that he would think enough of me and Jeff (Bostic) to allow us to pick up his award for him. I feel very honored and very grateful to be here for him, but I do really wish he was here.”

Clark’s 49er’s number, 87 has been retired by San Francisco and hung in Levi’s Stadium.

“That’s about as big as it gets for a professional guy,” Bostic told TigerNet. “It’s just going to be neat that in San Francisco, long after we’re gone, there will be number 87, Dwight Clark, hung in their stadium,” he said. “He will always go down in the history of San Francisco players as one of the greatest players to play for San Francisco. That number 87 will not be worn by another play ever again. Dwight is very deserving. He had a tremendous career in San Francisco. I’m very happy for him, I wish the health circumstances were different, but it just is what it is.”