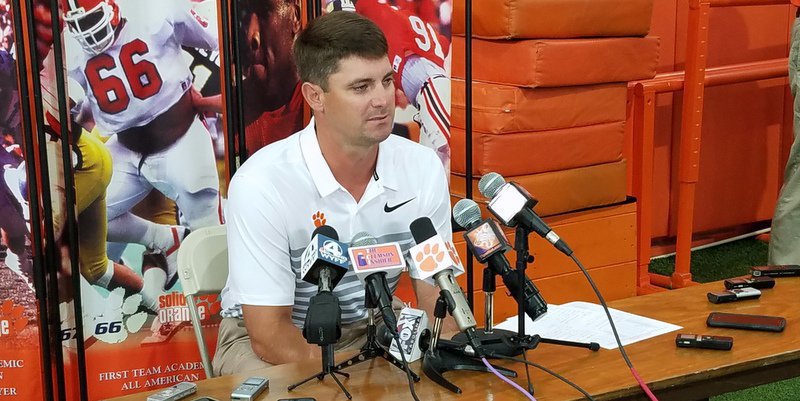 Scott talks to the media Monday

CLEMSON – Over the past two seasons, there were certain names on the depth chart that you know would be there week in and week out. A struggle one week didn’t mean losing a spot on the depth chart the next week. In the words of co-offensive coordinator Jeff Scott, players like Deshaun Watson, Mike Williams and Wayne Gallman had “money in the bank.”

Scott reiterated Monday that the new starts on the offense – players like Kelly Bryant and C.J. Fuller and Deon Cain and Milan Richard – have earned the right to start based off of their work during spring practice, over the summer and in fall camp.

But they have a little less money in the bank than the established stars, and Scott said that with so much depth on the roster, some of the spots might be fluid for a while.

“We always like to talk about competition, and I think we have one of the deepest groups, even though we might not have as experienced an offense as we have in the past,” Scott said Monday. “I think the depth that we have offensively is probably the best that it's been since I've been in Clemson in nine years. When you have good depth, it creates good competition.”

Scott said the current starters have earned the right to go out there first on Saturday, but those spots aren’t guaranteed past the first game.

“Up until this point for the last eight months, all we've had is practice for those guys to compete and that's how you come up with the depth chart,” he said. “Now, we're entering a new phase when the season starts and we're going to grade every rep meticulously and all of those types of things. There's nobody who has a lifetime contract or anything like that whenever we get out there going.

“Some of those guys like Deshaun and Wayne, they had a little bit of money in the bank, but it really came from what they've done in games and their production over years in games and all of those types of things. All of these guys get to establish that, but it's not something that we're using the term short leash or anything like that.”

He then said that he expects all of the new starters to go out and play well Saturday.

“We're fully going into this game expecting these starters to play well. That's why they're a starter. These guys that we chose to be starters on this depth chart is because they earned it,” he said. “We have a saying around here that best is the standard, so in everyone's mind in our offensive room with Coach Swinney and everybody, these guys are the very best that we have as of this moment going into the game. It's not the safest pick or anything like that, it's the very best.

“We have over 2,000 reps between spring practice and fall camp to evaluate these guys and to be on the field with them for three hours and then go right up there and be in the film room for three hours grading them, so every one of those guys are there because they've earned it. Now, it's a new opportunity. The game starts and how we go after this game will determine really at every position how they produce with their opportunity.”