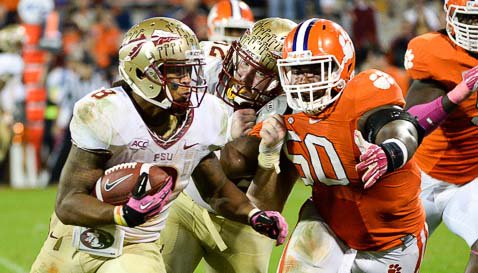 Jarrett is third on the team with 10 tackles for loss

Whenever fans or media pundits talked about Clemson’s defense over the previous 12 games, Vic Beasley

Vic Beasley
RS Jr. Defensive End
#3 6-3, 225
Adairsville, GA
View Full Profile was the name that naturally came up. Talk to opposing coaches and players, however, and they were quick to tell anybody that would listen that defensive tackle Grady Jarrett

Beasley brings the flash to Clemson’s defense – he has been among the nation’s leader in sacks since the start of the season. Jarrett, however, brings the bash.

In talking to NFL scouts over the course of the season, it was easy to see why Jarrett had thoughts about submitting his paperwork following the Orange Bowl next month and seeing exactly where he might land if he decided to forego his senior season and elect to take his talents to the next level.

He told the media on Wednesday, however, that he definitely wanted to return for his senior season.

“I thought about it (sending in the paperwork), but I came to the conclusion I knew I was coming back for my senior year,” Jarrett said. “I was thinking about sending it in just to get a grade, but I just felt when it comes down to it I'm one of those players who just needs an opportunity when it's time for me to leave and I feel like I'll make it (at the next level).

The junior from Conyers, Ga., has started 23 of Clemson’s last 25 games, and he has notched 77 total tackles this season, including 10 for loss.

Danny Ford
Former Head Coach
View Full Profile was leaving Wednesday, and Clemson football SID Tim Bourret introduced Jarrett to Ford. However, as soon as Ford heard Jarrett’s name, he ran over to the junior to shake his hand, and give his own two cents.

“Son, you are a fine football player,” Ford. “I really enjoy watching you play.”

Jarrett wasn’t highly-recruited coming out of high school, despite boasting NFL bloodlines. His father is former Atlanta Falcon Jessie Tuggle and he works out with former Baltimore Raven Ray Lewis in the off-season.

Jarrett has said many times that he plays with a little bit of a chip on his shoulder, constantly wanting to prove his doubters wrong, and said he doesn’t need the opinion of an NFL scout to know that he is a good player.

“It was the same thing coming in here as a freshman when I wasn't a really highly recruited guy, but I always believed in myself that I would be where I'm at today. So it's just self-belief and I really don't need the opinion of the scouts if I know that I'm not going to leave right now, even though I thought about it.”

Clemson boasts several juniors that could submit paperwork, and Jarrett said that could be a problem as the team prepares for Ohio St. and the Orange Bowl.

“We’re going to have to keep that from being a problem,” Jarrett said. “Getting this win would be a great stepping stone for our program. We’ve got to get that message across to all of my teammates and all our players.

“The people who are considering moving on with their career , we’ve just got to keep them focused. I don’t know who that is, but just making sure everybody is focused on this game and finishing this 2013 season and not looking forward to anything else.”