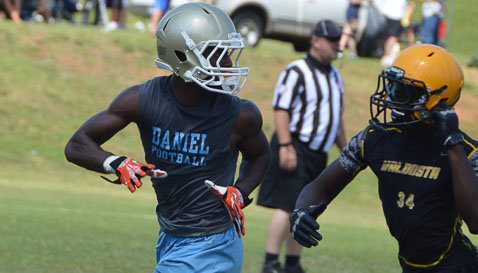 With six former Daniel Lions currently on Clemson’s roster, Jae’lon Oglesby should feel right at home when he arrives on campus later this month.

With friends like DeShawn Williams, Adrien Dunn, and D.J. Greenlee, and a cousin in Shaq Lawson, the four-star running back and slot-receiver will have a reunion of sorts when he gets to Clemson.

Having the opportunity to play college football with a member of his family, will make his time as a Tiger all the more special.

“Shaq Lawson is my first cousin,” Oglesby said. “He was at my graduation cookout and he was telling me how excited he is to be able to play with me at the next level. We played in high school together. It's a blessing.”

Oglesby liked what he saw from Clemson’s running attack during the spring game, but he thinks that with some hard work he can have the opportunity to compete for playing time during his freshman season.

“I thought the running game was pretty decent,” Oglesby said. “Wayne Gallman showed a lot of highlights and a lot of glimpses. But, I feel like I can get in and compete a good bit. I just want to be able to compete with those guys.”

Despite rushing for 2,176 yards and 21 touchdowns and having 38 receptions for 557 yards and six touchdowns, Oglesby will need to prove to offensive coordinator Morris and running backs coach Tony Elliott

Tony Elliott
Assistant Coach / Running Backs
View Full Profile that he can be an every down back at the college level.

“I’m very excited,” Oglesby said. “The coaches have told me that I have to be prepared to come in and work hard from day one. They want me to prove to them that I can do it every play and every down.”

However, the most difficult adjustment Oglesby will have to make is trying to add weight.

Oglesby is scheduled to arrive on campus on June 22nd, but will have to wait on final ACT scores, which will be taken Monday.