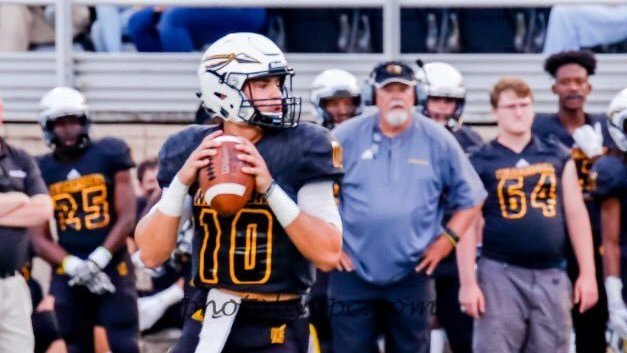 Any college coach worth his weight will tell you that stars aren’t always indicative of the type of potential a recruit might have. Instead, they say, look at his offer list.

A true dual-threat option at the high school level, Plumlee threw for 1,759 yards and 14 touchdowns while adding 599 yards and 8 scores on the ground in his first season as a starter for Oak Grove High School. Based off of his highlight reel, Plumlee appears to possess legit 4.40 speed — based on his junior season highlight reel.

He spent several hours at Clemson last Thursday in a getting to know you session with quarterbacks coach Brandon Streeter. He also spoke head coach Dabo Swinney and received a complete tour of the facilities and the campus.

"It was really nice. I got to see about everything I wanted to see," Plumlee said. "It's a great place, a really cultured place. I really liked it. It seems like a really nice college."

The 3-star has offers across the board. Alabama, Georgia, Florida, and Nebraska have offered as a quarterback, while Notre Dame wants as a slot receiver and Auburn and Mississippi State are leaning toward Plumlee playing receiver or defensive back.

He wants to play quarterback, however, and thinks Clemson’s offense would be a perfect fit.

"We looked at it today and he said when Deshaun Watson was there they almost did 50-50 between the run and the pass, so that would probably fit me very well considering I can do things with my legs better than other quarterbacks can do," Plumlee said. "That would fit me."

Plumlee said Streeter’s message to him was simple – be patient when it comes to receiving a Clemson offer.

"They have four possible guys they are looking at right now and he said I am on the list," Plumlee said. "He said he wants to really get to know me better as a person and watch me throw a little bit (this spring) and make a relationship with him before he offers me because once Clemson offers you it's a commitable offer. He really wants to check in and make sure all the boxes are checked before he offers anybody. If I were to get a Clemson offer, it would mean a whole lot. Obviously, Clemson being a really good school, they do a whole lot of winning, which I like to to, and it's also just a really nice school on the academic side. And it's a nice brand. Everybody knows Clemson. It would mean a lot if I were able to get a Clemson offer."

Plumlee has offers from Georgia, Alabama, Notre Dame, Florida, Nebraska, Ole Miss, North Carolina, Mississippi State, Auburn and others. He won't graduate early because he's also a baseball player and he's not sure when he'll make his decision or when he'll sign.