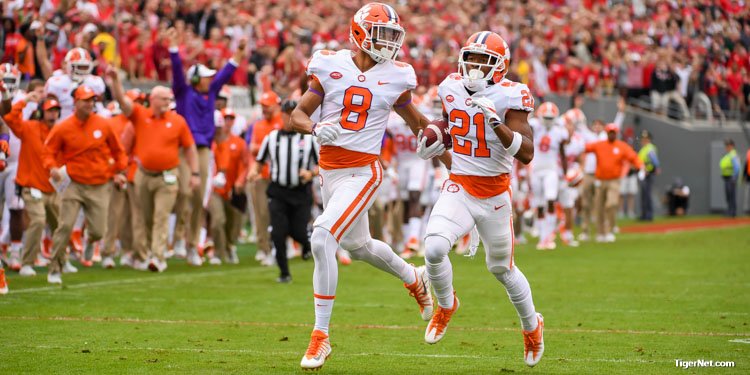 RALEIGH, NC – Clemson takes one step closer to an ACC Atlantic Championship after a thrilling win over No. 20 N.C. State.

The offense sputtered and the defense stumbled for much of the game, but when it mattered most both groups stepped up to beat the Wolfpack 38-31 in Carter-Finley Stadium Saturday evening.

OFFENSIVE PLAYER OF THE GAME: Hunter Renfrow isn’t going to be one of the top guys to show up at the top the stat sheet, but when his team needed him most he was there. After an interception, Renfrow drug N.C. State’s defense for 16 yards and a first down, setting up a Kelly Bryant two-yard touchdown run, a score that proved to be the difference in the game.

After N.C. State kicked a field goal to make it a one-score game, Renfrow recovered the onside kick in the middle of the field to give Clemson the ball with just under two minutes.

DEFENSIVE PLAYER OF THE GAME: Clemson’s cornerback group is depleted and came to Raleigh with just Ryan Carter, A.J. Terrell, Amir Trapp and Trayvon Mullen. Carter played nearly every snap and in the third quarter nearly picked off Ryan Finley. In the fourth quarter, Carter got his revenge with a pick – the second of the season for Finley and just the 10th of his career – to set up the Tigers’ touchdown and a 38-28 Clemson lead with just over six minutes to play.

Feast Mode: With five seconds to go in the third quarter, Tavien Feaster went untouched for an 89-yard touchdown, giving Clemson its first lead of the game. . It was the third-longest touchdown run in Clemson history, and the longest since 1993 (Derrick Witherspoon). With the score, Clemson led 31-21 at the end of the third quarter. The 89-yard run put Feaster over 100-yard mark for the first time in his career.

Big Game Hunter: After Carter’s interception, Clemson’s offense faced a 4th-and-5 and Hunter Renfrow took over. Renfrow caught a pass from Kelly Bryant a yard short of the marker and carried multiple N.C. State defenders for a 16-yard gain and a first down.

Fourth Down Heroics: N.C. State’s final drive had it all. Heroics and penalties. Dorian O’Daniel jarred a ball loose on the goal line with just under 30 seconds remaining. An illegal shift negated a big gain on fourth down that would’ve put State inside the five yard line. K’Von Wallace sealed the win for Clemson with an interception on the nine yard line to keep Clemson’s division and playoff hopes alive.

STAT OF THE GAME: Clemson was 4-for-4 in the redzone, while N.C. State was 4-of-5. The only time the Wolfpack failed to score was on the final drive of the game, ended by a K’Von Wallace interception.

Clemson returns home to face Florida State Saturday, at a time still to be determined. The Seminoles held on to beat Syracuse 27-24 Saturday afternoon. Syracuse missed a field goal as time expired. With a win on Saturday, Clemson will clinch the ACC Atlantic for the third straight year.

NC State travels to Boston College to take on the Eagles.