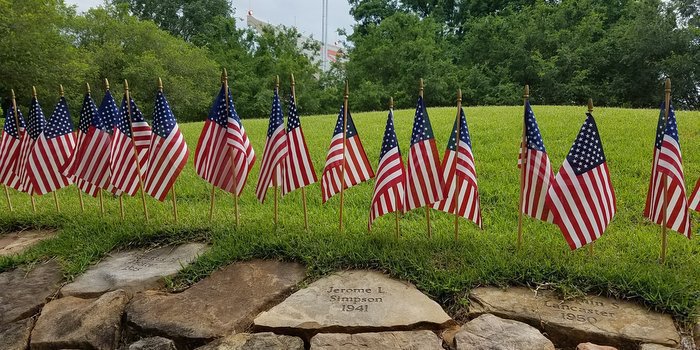 A yellow rose sits among the flags

CLEMSON – A rumble of thunder sounded in the distance, and a faint breeze rustled the leaves on the trees and the assembled American flags that decorated Clemson’s Scroll of Honor. It was a fitting silence on a day that requires us to take a moment to reflect on the men and women who have given their all in defense of our great nation.

I finished baseball interviews earlier Monday and dropped by the Scroll of Honor to pay my respects. I am a frequent visitor to this solemn spot, yet it just feels right to walk around and read the names of Clemson’s war dead, only right to see and say the names and in some small way let them know they are not forgotten.

The students are, for the most part, away for the summer. University employees don’t get Memorial Day off, so they were ensconced in offices around the campus, staying cool and dry. For others, this is a day off of work, a chance to have a picnic or a cookout. A chance to head to the nearest lake. It’s more about relaxing and taking time away from the daily grind.

As I walked around and read the names, the wind began to blow a little harder, and a spat of raindrops fell here and there. Flowers from a wreath began to blow in the wind, and before long they littered the ground and began to make their way towards Memorial Stadium.

I looked up, bounced out of my reverie by the sound of a car, and read these words above Clemson’s iconic hill: 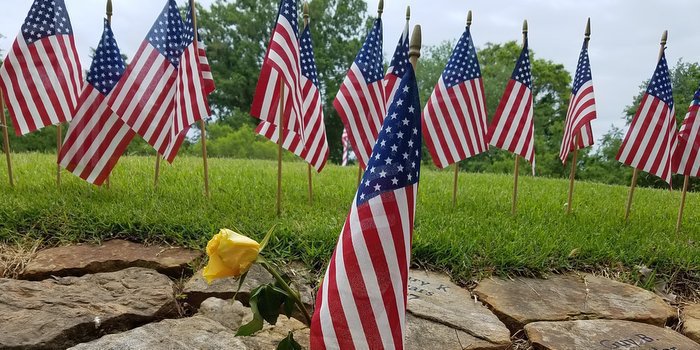 A yellow rose sits among the flags "

Memorial Stadium. Honoring all Clemson alumni who have made the supreme sacrifice in the service of our country.

The words have new meaning for me today. My wife Nikki and I attended the ACC Tournament in Louisville this past weekend, and on the way home stopped by what used to be known as Kentucky’s Commonwealth Stadium. Earlier this month, a deal was struck between the university and Kroger, and Commonwealth Stadium will now be known as Kroger Field. After a week spent at Louisville’s athletic complex – where every sporting venue has a corporate name – it was nice to return to Clemson and see Memorial Stadium on the venue.

I hope Clemson never becomes a corporate sell-out, and I hope that our venerable edifice is always known as Memorial Stadium, Frank Howard Field.

At Clemson, almost 500 students and graduates have been killed in this nation's wars and in peacetime operations. All the way back to the World War I until the present, the Clemson family has lost members that served so bravely and courageously.

Clemson's football stadium was named Memorial Stadium as a tribute to the Clemson students who made the ultimate sacrifice in service to the United States, and it makes me proud that Clemson has always honored its military heritage – and those who have fallen – in this manner. 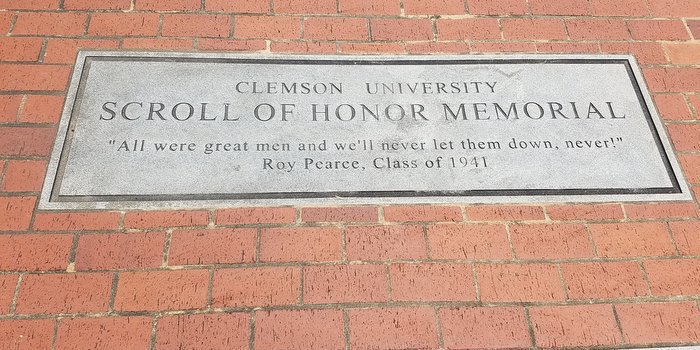 A reminder that not all make it home

The Scroll of Honor stands as a reminder of why the stadium was named Memorial Stadium, and those names that are etched in the rocks serve as a memorial to those who have laid down their lives to preserve the freedom we enjoy today.

Near some of the names, a simple yellow rose was placed between the cracks in the stones, a simple yet poignant reminder that each of those who gave their lives has family who still lives in and around the area.

As the thunder continued to roll in the distance, I made one more trip around the small park area, with the lights of Memorial Stadium standing watch overhead. This was, for me, why I love Clemson like I do. There are no grand ceremonies, no sentinels standing guard today. Just a beautiful and poignant reminder – we can attend games on one side of the street because of the names on the other side of the street.

At Clemson, this is hallowed ground.

The end of Abraham Lincoln’s Gettysburg Address says it best:

But, in a larger sense, we can not dedicate -- we can not consecrate -- we can not hallow -- this ground. The brave men, living and dead, who struggled here, have consecrated it, far above our poor power to add or detract. The world will little note, nor long remember what we say here, but it can never forget what they did here. It is for us the living, rather, to be dedicated here to the unfinished work which they who fought here have thus far so nobly advanced. It is rather for us to be here dedicated to the great task remaining before us -- that from these honored dead we take increased devotion to that cause for which they gave the last full measure of devotion -- that we here highly resolve that these dead shall not have died in vain -- that this nation, under God, shall have a new birth of freedom -- and that government of the people, by the people, for the people, shall not perish from the earth.

At Clemson, in the shadows of where our football heroes play, our true heroes are remembered.