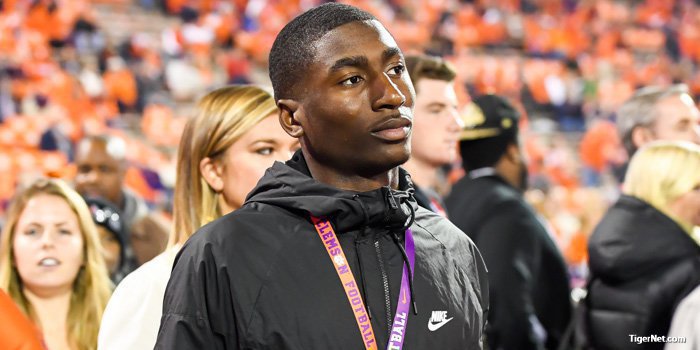 Following in the footsteps of Sidney Rice and Quinshad Davis, Dennis Smith is the next great wide receiver from Gaffney (SC).

With a decision looming, how big was it for Clemson to finally extend the offer?

"They're definitely one of the schools that I can see myself going for the next four years," Smith told TigerNet Sunday afternoon. "They're right there, but I'm still open in my recruitment. I'm not shutting anything down because I still have a couple of questions or things to find out about Clemson that I really want to know and explore. I'll probably make a decision soon. I was really just waiting. There isn't a set date, but I want to talk to my mom and my brother. It really could be whenever."

Smith said Scott dropped the news of the offer on him unexpectedly.

“I got there, ready for junior day, and Coach Scott and my offensive coordinator had been meeting,” Smith said. “Coach Scott pulled me off to the side, and we were just talking football, and he just slipped the offer in there. We have a great and understanding relationship. He knows me, and I know him. I've known him and have been talking to him for a long time.”

The 6-2, 190 pounder said he’s proud of receiving an offer from the national champions.

“It's huge. It means a lot,” he said. “The defending national champions and a team right here from South Carolina offering me a scholarship. I know I can I get an education there and compete at a high level.”

Part of Saturday’s junior day activities was watching Clemson’s third spring practice and Smith said the leadership amongst the wideouts is what caught his attention.

“It was their first day in pads, and I got to watch Coach Scott and the receivers in action,” he said. “I like that they can have fun, but you can see that they also like to have fun and work, too. They are very welcoming, and everybody is there to get better. I watched all of the receivers closely, but Deon Cain he stood out there a lot to me. He's leading, so that's always big when you've got somebody out there pushing everybody. Hunter Renfrow, you've got two leaders in the receiver corps. There's nobody walking or dropping balls. They're doing push ups. They're just leading out there.”

As a junior, Smith registered 72 catches for 1,180 yards and 11 touchdowns. He said that while he comes from a long line of great receivers, he’s just trying the best he can be.

“I know the line, but I'm not trying to out-do anybody. I just play my game,” he said. “It's nice to keep it going and to live up to it, but I don't get caught up in it. I just do me and stay my own person. I don't try to play like anybody else.”