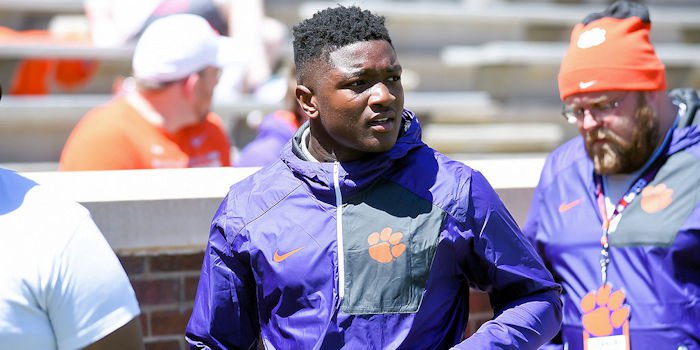 Jones is shown here on a Clemson visit

Mikel Jones could end up leaving the sunny beaches of Miami for the rolling hills of Clemson, but the Tiger coaching staff still has work to do.

Jones, a 2019 weakside defensive end out of Bradenton (FL) IMG Academy, has gone to great length in his football career to make sure he is noticed by top-notch schools and seems to have succeeded.

Jones has accumulated offers from Louisville, Auburn, Clemson, and his home school of Miami, but Coach (Brent) Venables may have convinced the Miami native to look outside of his comfort zone.

Venables is known to keep in close contact with the young players he recruits, in his way, initiating them into the Clemson family early.

“If it would be anyone, it'll be coach Venables,” Jones said when he asked which coach with which he’s built the best relationship. “I haven't heard from him a lot lately, but I did see him at practice last week. He called me after practice to talk about me visiting campus this summer.”

Getting to experience the Clemson family and atmosphere in person may just be the deciding factor for the recruit.

“Getting on campus one more time with my family, and communicating with the coaches more is something I want to do,” Jones said of a Clemson visit.

Jones was not present for the spring game held in April, but did notice the abundance of freshmen on the field. The reassurance of freshmen being given the chance to dominate and perform in a game-like setting early in their career has allowed Clemson to stay in the spotlight for the high school junior.

“I have been noticing and I do take that into consideration. I was a Facetiming with Mike Jones today, the freshman linebacker. He came to watch us practice today,” Jones said when asked about Clemson’s confidence in their freshmen.

Another current freshman at Clemson, Xavier Thomas, has been helping the prospect prepare for his future on the big stage.

“I talked to Xavier a couple of weeks ago, he did tell me that I have to make the most out of every day, “Jones said, “And that it's a different type of grind at the next level, so I have to be mentally ready for it.”

Being a Miami native, the offer from the University of Miami didn’t come as a surprise for many. The Clemson offer however, did.

“Everyone kinda sees me on a slightly bigger level because of the Clemson offer. Not too many people in Miami have that offer,” he said.