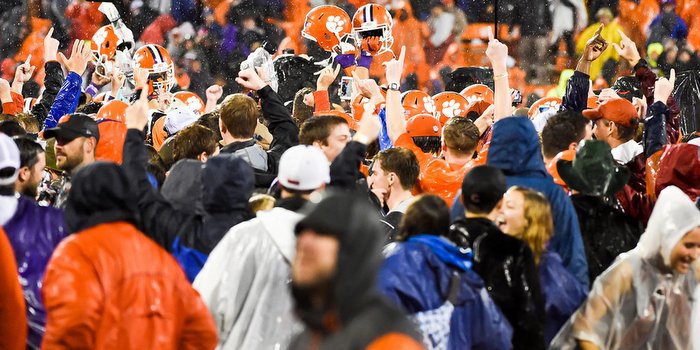 Clemson fans celebrate after the long and soggy night

I was there when…….Clemson defeated Notre Dame in a driving rainstorm.

The number of people who say they were at Woodstock far outnumbers the number of people that were actually, and if you took a poll you would find out that somewhere close to half a million people were in attendance the night that Reggie Jackson hit three homers in the World Series.

The numbers grow each year and people’s memories dim as wishful thinking begins to creep in. For 82,415 people who braved the rain and less than ideal conditions Saturday night in Death Valley, they will forever be able to say they were there. My mother-in-law wanted to keep her ticket stubs from the game as proof, but they disintegrated in the rain.

But she was there, in a game in which I didn’t know what to expect from an attendance standpoint. There were segments of Clemson fans that seemed more intent on making a dollar and re-selling to the highest bidder, and that had me worried. There were fans all over message boards and social media wanting to get rid of tickets, afraid of the rain and afraid of the traffic.

There were people from the lower part of the state that couldn’t make the trip because of the storm, and it’s a good thing for many that they erred on the side of caution and watched the game on television. With all of that in mind, I didn’t know what to expect from an attendance standpoint. Would there be thousands of Notre Dame fans? Would the rain keep thousands away from the game? Would ABC have to come up with creative camera work to make it seem like there were more fans in attendance than were actually there, like they do with the University of Miami?

We drove onto the campus around 3 p.m., and I was shocked at how many cars were already parked on the side roads, and it was evident as I walked towards Doug Kingsmore Stadium for my segment on the Tiger Pregame Show. The lots were filling up and people were tailgating – just like normal – as the rain continued to fall.

It was while I was on the radio that I told the listeners – don’t miss this if you can get here. Be here today so you can say, “I was there when Clemson beat Notre Dame in a monsoon.” I remember my first Clemson football game – my dad brought me to watch Mike Eppley lead the Tigers over N.C. State in a cold rain, and I wouldn’t trade that memory for anything. Turns out, they didn’t need my exhortation – they were already there or on their way.

As we began the countdown to kickoff, the stands began to fill and it didn’t take long to notice that Death Valley was either at or near capacity. And this crowd – brought together by a love for its team and unified in their defiance of the forecast and the stinging rain – was at full throat from the moment the players took the field for warmups.

We settled into our seats in the press box – it’s now open air – and we were able to feel the excitement building as the seconds ticked off the pregame clock. The rain came down in fits and starts, but when the buses pulled around the stadium to dislodge Clemson players and coaches at the top of the hill, it was raining sideways.

It didn’t matter. The Tigers ran down the hill, and I heard one Notre Dame scribe exclaim, “Wow. What an entrance.”

What an entrance indeed. What a crowd. As the rain fell harder and harder in the second half, the crowd got louder. Players and coaches have mentioned it. Jayron Kearse

Jayron Kearse
Jr. Safety
#1 6-4, 224
Fort Myers, FL
View Full Profile told the media Monday that the players knew the crowd was going to do it’s part, so they did their part.

Brent Venables
Def. Coordinator / Linebackers
View Full Profile stood – dripping and sweating – in the hallway outside of Clemson’s locker room after the game and called it “one for the ages.”

It was, indeed, one for the ages. I was there, and even though I wasn’t a fan and worked throughout, I can say I was there when Clemson beat Notre Dame in a driving rainstorm, defying the pundits and the weather.

I was there when Clemson beat Notre Dame in the rain. And it was one for the ages.