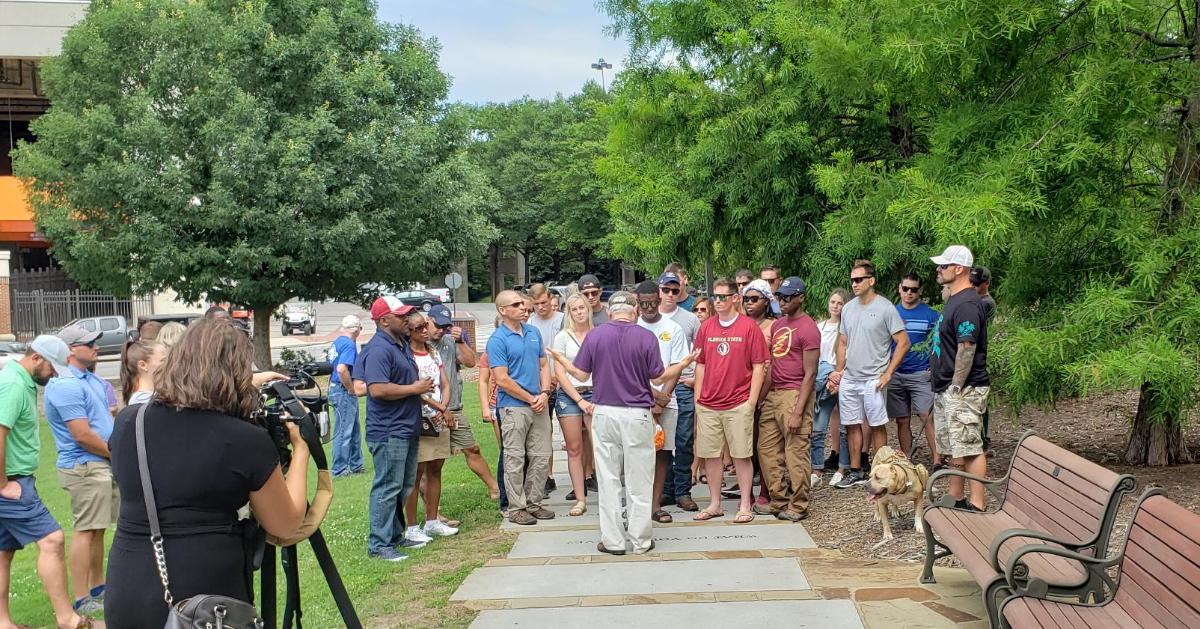 The Tiger poses with a veteran at Howard's Rock Thursday

CLEMSON – It’s never too early to teach our children about what it means to serve, and who our real heroes are.

Clemson University hosted members of the Upstate Warrior Solution Thursday morning, with a tour given of the Scroll of Honor by Colonel Sandy Edge.

Clemson partnered with Keowee Key in hosting and providing a tour of several facilities on campus for members of The Upstate Warrior Solution, a nonprofit organization that aims to raise awareness for injured men and women that serve in the United States Armed Forces.

Edge administered an overview of the Scroll before lending motivation to the troops by having four soldiers stand near and read the four boulders, each containing a word of the question, “How will you serve?”

I took my eight-month-old son, Eli, with me to the program with the thought that our children should never be thought of as too young to learn what it means to serve and to be around those who have sacrificed for our freedoms (Eli even dutifully clapped for one part of Colonel Edge’s speech).

Edge also told the story of Clemson legend Ben Skardon, a survivor of the infamous Bataan Death March, before telling the visitors that they are all now a member of the Clemson family. Eli and I stood under the trees as a light breeze carried Edge's words across the crowd. To stand there with my child and look at the names on the Scroll of Honor is humbling, and I felt like my child needed to be there, to understand that as an American citizen he has a birthright and that birthright includes being the kind of citizen and person that would make those people proud.

The Upstate Warriors then absorbed the history of Memorial Stadium, Howard’s Rock and had an opportunity to rub it before making their way down The Hill and into the stadium. 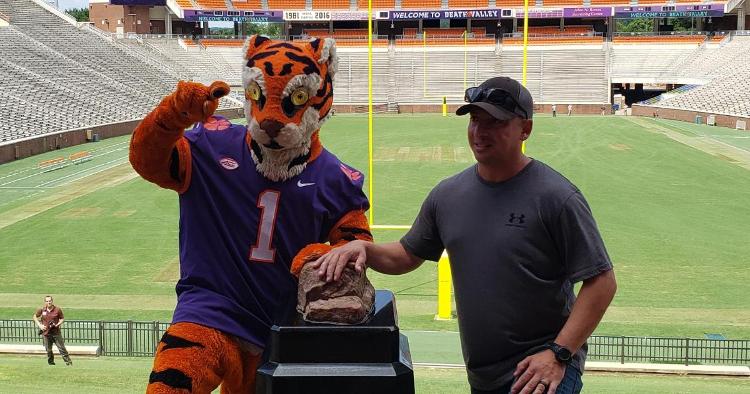 The Tiger poses with a veteran at Howard's Rock Thursday "

Edge was quick to remind me of the true meaning of those are who are true heroes.

“Even the one person that I call a hero from time to time (Skardon) has put me back in my place, and I agree with him,” he said. “The ones that are the true heroes are the ones that made the supreme sacrifice and didn't return. They might have stepped in the line of fire or whatever and they gave their life. Those are the heroes.”

One visitor wasn’t a visitor at all. Tyler Warren grew up in Los Angeles but graduated from Clemson in 2005. How did a young man from Los Angeles wind up at Clemson?

“It’s a small world. My dad was military, and my mom was from Seneca,” Warren said. “When Winthrop was an all-girls school, the guys from Fort Bragg would drive over. So they met out on a blind date, and he took her out to California. I was the only kid out in California wearing a Clemson paw, and everyone thought it was a high school. I had to let them know that Clemson University was the premier college football school in the south.”

Warren got his degree from Clemson and went to Officer Candidate School and wound up at Fort Bragg, where he served in the 82nd Airborne. Making his way back to Clemson with his fellow veterans showed Warren a different side of his school.

“It's special. I never wanted it to be about me, but this week has been about what we've done, and it's special,” Warren said. “After I got out in '13, for six years, I've never given much thought to my two deployments and seven years served and the sacrifices my wife made. So it's nice to see us taken care of by the Keowee Key community. I learned a lot out here today, and I took a lot of pictures at the Scroll of Honor. There are definitely some names I will be Googling.”