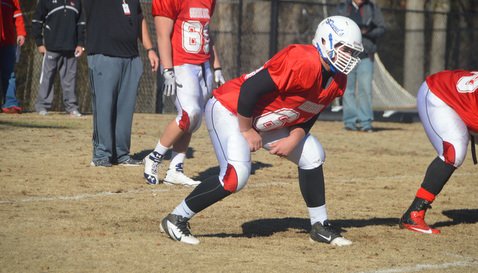 Hearn works out at the Shrine Bowl practice Monday

View Full Profile is already preparing himself to fill that void.

The Williston-Elko (SC) standout and Clemson commit has been a mainstay at right tackle for the Blue Devils and at 6-5, 315-pounds Hearn has the physical stature to contribute as soon as he steps on Clemson’s campus.

View Full Profile suffered a shoulder injury during Monday’s practice, but Hearn told TigerNet that the Clemson coaches want him to play right tackle – a position he’s already preparing for.

“I like tackle because I played tackle my entire high school career,” Hearn told TigerNet Monday after Shrine Bowl practice. “I like being on the edge. Every game since my ninth grade year, I’ve started at right tackle. I’ve been working every day during the offseason – running, lifting, trying to get smarter with football knowledge and just putting in work.”

Hearn will have the chance to prove himself this week during practice and in Saturday’s game at Gibbs Stadium as he takes on some of the top defensive ends from North Carolina and South Carolina – a challenge he embraces.

“They are all pretty equal. They go hard, just like I do,” Hearn said. “I’m just trying to hang in there with them and earn a spot.”

Hearn committed to Clemson in February and he said that there is just no other place like Clemson.

“It’s just different in Clemson – the facilities, the coaching staff, the players, the people,” Hearn said. “You just feel loved when you are around there. Ever since day one, I knew that’s where I wanted to be.”

Hearn will graduate in June and plans to start his Clemson career shortly after graduation, but he said that the Clemson coaches are telling him to begin his preparation now.

“I’ll probably go up there two weeks after I graduate in June. Right now, they are just telling me to stay in shape, don’t gain any more weight, finish strong in the classroom and keeping lifting weights,” Hearn said.