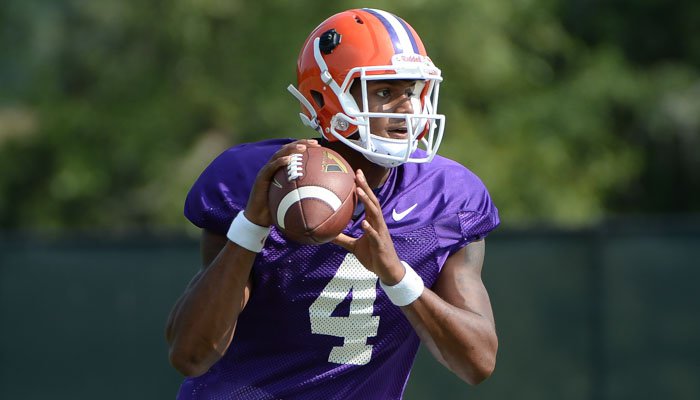 Deshaun Watson will don a green jersey for Monday's practice

With the most important game of the season looming, Clemson will be getting several critical pieces of its offense and defense back at practice Monday.

The Tigers were without starting quarterback Deshaun Watson

"Injury-wise we came out of the game well. T.J. Green

T.J. Green
So. Safety
#15 6-3, 205
Sylacauga, AL
View Full Profile we held. His hamstring was sore,” Swinney said during his Sunday teleconference. “Corey Crawford could have played, he and B.J Goodson. We just held them and they will be back in practice tomorrow. Deshaun Watson will be in green tomorrow and we'll see where he goes from there.”

The green jersey means that Watson will participate in all drills but won’t be full go when the team goes good on good.

“Yes. He'll be limited. We won't let guys (in green jerseys) do live work,” Swinney said. “For him it's not much different. We don't hit quarterbacks in practice anyway. Corey will be in a green jersey too. He won't be live when we go good on good. We'll just have to see where Deshaun is during and after practice tomorrow."

However, just because Watson is practicing doesn’t necessarily mean he will play Saturday. Swinney said that the freshman quarterback will need to show him that he isn’t limited in his mobility.

Swinney knows what this game means to the Clemson players and the fans and said that he realizes what a special opportunity his team will have on Saturday.

"This game is always a special one and it comes once a year,” he said. “We know what we have to do in order to give ourselves a chance to win. We look forward to getting back with the guys tomorrow."

Clemson has been looking forward to the game against South Carolina since the conclusion nearly one year ago – even going as far as installing countdown clocks in all of the meeting rooms. 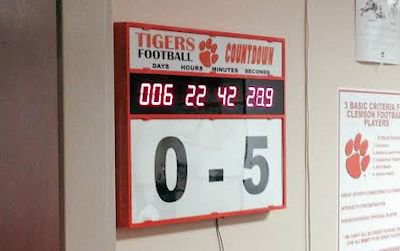 "It's something the coaches wanted to do,” Swinney said. “We don't really talk about it but we have it there every day. This is something we all live with every day. I didn't have a problem with it. We didn't make a big deal out of it. We haven't said much about it. We just wanted to make sure we kept it in front of us. It's been a thorn in our side. We've done some great, great things. You're never perfect and there's always room for improvement. This is something we need to improve on."

The players of the game from Georgia State

"He's getting there. He's still a little rusty in terms of route-running. He was a little off on a couple of balls. He just hasn't played a lot. He's been inconsistent in terms of just being able to practice. If you're not practicing on this level each week, it's hard to just jump back out there and be as efficient as you need to be. He'll get better in a hurry. The positive is, he feels good."

"We expect him to be a great player. You don't want to throw a guy out there before he's ready. That can really do some damage. We wanted to be careful and cautious with him. He's still getting the system down. We just weren't comfortable with him in certain situations the last few weeks. He's gotten better and better, though. It's been about practice. We felt like we needed to challenge him. And he's still getting into football shape. He hasn't played a lot and he hasn't been in a lot of situations.

“We just kind of cut him loose, though. He got in a nice rhythm and did a great job. He had two or three big plays. Just very workmanlike. He's going to be a hard guy to tackle especially as he gets more and more comfortable. He needs an off-season to get himself back to where he needs to be. He has certainly earned more opportunity this week and in the bowl game. He's getting ready at the right time. I am proud of him. He has persevered. He's focusing on what he came here to focus on."

On Dylan Thompson’s performance this season

"He's a good player. He really is. He's got a great grasp of what they do offensively. He's very smart, good instincts and understands where to go with the ball. They do a good job of getting your structure defensively and putting themselves in the right call. He executes. He runs pretty good. He's very timely as far as how they involve him in the run game. He's got an outstanding offensive line, a bunch of veterans. They're pretty much the same as last year. They've been very good, very balanced. He has thrown a bunch of touchdowns and has a good run game. He's definitely a leader, a high character guy I really have a lot of respect for. I've gotten to meet him a few times. He's a good guy."

On South Carolina’s offense and use of trick plays

"You have to do your job. You have to be very disciplined. They do a good job of game-planning on their end and attacking you with double moves. They threw a touchdown pass out of the wildcat. They do a nice job of setting some things up off of their tendencies. The biggest thing is you have to win your matchups and be disciplined on the back end. When you over-play things, that's when the trick plays will get you."