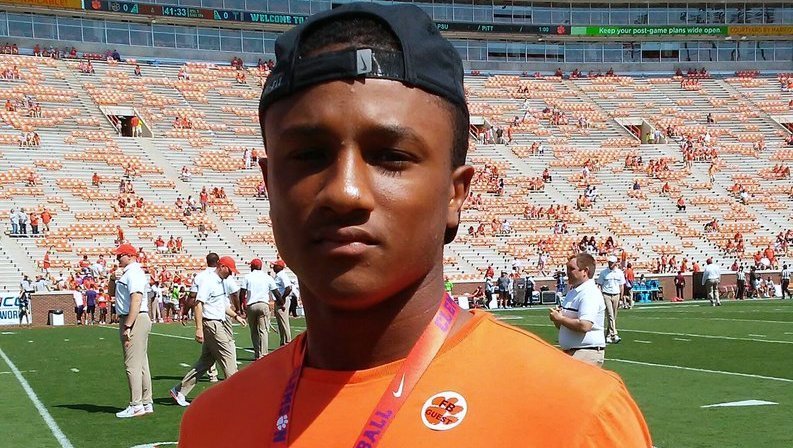 Torrence is shown here on a visit to Clemson

Clemson’s coaching staff has been busy during the month of May, handing out multiple offers in the secondary. That included an offer to 2020 3-star safety prospect Rashad Torrence II of Marietta (GA).

He has picked up offers from Alabama, Florida, Miami, Penn State, Kentucky, Mississippi State, Duke, Louisville, Tennessee, and Syracuse but was excited to pick up a Clemson offer.

“It was very exciting. It was one that I’ve been waiting on for a very long time,” Torrence told TigerNet. “I knew they had interest but their process is slower than other schools, so I just had to patient.”

He then said he understands why a Clemson offer is difficult to obtain.

“I guess they try to get the right guys and they’re not so quick to pull the trigger on certain guys,” he said. “They try to make sure they’re getting that right athlete for the school.”

The offer came during his high school’s spring practice.

“Coach (Brandon) Streeter came to our spring practice and watched some of our DB drills,” he said. “Afterward, I was informed that I received an offer from Clemson. I’ve known a lot about Clemson. I’ve seen them a lot on television. I’ve been to the school a couple of times before. My knowledge of Clemson was very high before I got the offer.”

He says he also loves the Clemson campus and facilities.

“I can’t pinpoint the date but it was after they built the new facility,” Torrence said of his last visit. “It was great. It was very welcoming. They basically have everything that a student-athlete should need or want in one building so you don’t have to travel all over campus.”

Next up is another trip to Clemson and then he will take some time to see what schools he wants to visit next fall.

“Definitely. I’m going to try to get up there at some point over the summer,” he said. “Right now, I don’t really have a top number or a top group of schools but Clemson is a school that’s definitely an eye-opener.”

Torrence totaled 89 tackles with an interception and five passes defended as a sophomore at Marietta.