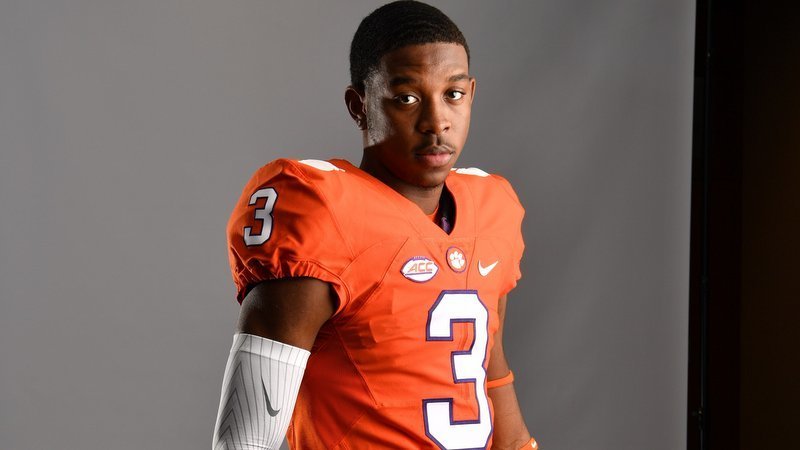 Flowers poses in a Clemson uniform

Trevon Flowers has a lot to think about over the next few days.

The 2018 safety prospect out of Tucker (GA) visited Clemson for part of three days (Wednesday, Thursday, Friday) this week and headed up to Knoxville for a visit to the University of Tennessee Friday afternoon. The former Kentucky baseball commit now wants to sit down and make a decision before next Wednesday’s National Signing Day.

Flowers signed with Kentucky’s baseball program in November, but Flowers decided to play football his senior season and did well enough to start earning late football offers. Those offers included Clemson and Tennessee, and now Flowers wants to play both sports in college.

The Clemson offer came as a surprise.

“It was a blessing. It happened kind of quick,” Flowers told TigerNet. “They called me on Saturday and everything started happening after that. I knew a lot about them from TV, but I learned a lot more coming here and actually seeing what they do, how everything looks, how the people are, how the coaches are and all of that.

“He told me that Clemson is the right place to go if you want to win,” Flowers said of Williams. “He said it's cool. He said you won't get into any trouble around there and that it's a pretty safe environment.”

“I was pretty much with Coach Conn the most. He was basically telling me the same thing,” Flowers said. “They need safeties bad. He's seen what I can do and thinks I have a lot of potential. He just said that if I come here, I have a good chance of playing and they want me.”

After meeting with Clemson head coach Dabo Swinney, Flowers made his way to Doug Kingsmore Stadium to talk with head coach Monte Lee. Flowers projects as a top-of-the-order shortstop/centerfielder.

“I talked to Coach Lee and all of the baseball coaches. I went over there Thursday and talked to everybody,” Flowers said. “It's amazing. They have a great program. I knew a lot about the baseball program because I've played there before during the summer. I saw a lot of new stuff that I've never seen - the facilities and their team room.”

The visit to Tennessee is more of a fact-finding mission.

“Really, I just want to see the people that I'm around. I want to ask what they plan on doing to rebuild,” Flowers said. “I want to see the facilities and everything. I've got to look at the details if I'm going to be there for the next three or four years.”

Where does Clemson stand heading into the final few days?

“Clemson is definitely up there. I'll make a decision probably after this visit,” Flowers said.