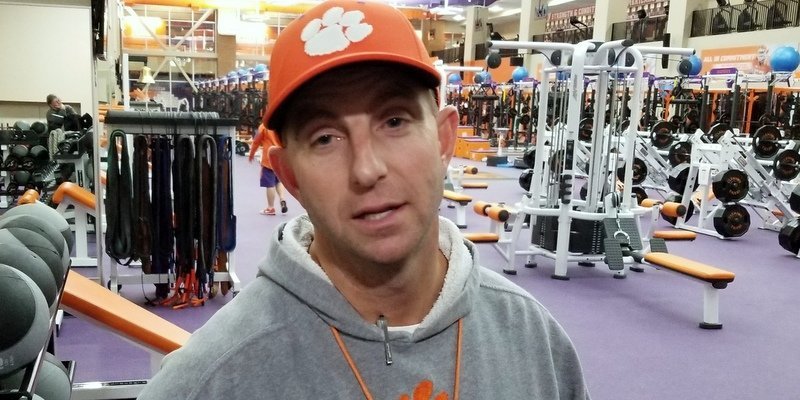 Dabo Swinney met with the media Friday afternoon and discussed a variety of topics.

CLEMSON – When Kelly Bryant walks out of the locker room wearing No. 99 and Dexter Lawrence is wearing a No. 2 jersey that’s two or three sizes too small, head coach Dabo Swinney knows the end of bowl practice is here.

Clemson practiced for the final time before a short break for Christmas Friday morning and Swinney said it’s always odd seeing the players in different numbers.

“There are certain traditions around here that I don't know where they came from or where they started and that's one of them,” Swinney told the media Friday afternoon. “Forever and a day that I've been here, the last practice they all swap jerseys. I always forget about it until I walk out to practice on this day every year and I go, 'Oh, it's that day again,' and the quarterback is wearing No. 99.”

After a lackluster beginning to Sugar Bowl practice, Swinney said he likes the focus he’s seen out of his team this week as preparations for Alabama have continued.

“Good practice. Really pleased with what we got accomplished here at Clemson. The guys have been super focused, especially since last Friday when they finished finals,” Swinney said. “The guys have really put in good work and I feel good about what we've done. We've got the plan in, so I'm excited for everybody to get a few days here a little break. We'll come back here on the 26th so everybody has a good travel day, which is nice because we've been traveling back on Christmas Day for the past several years, so now everybody can really enjoy that day and come back on the 26th and then we'll have a normal game week. We'll practice here and head on to the bowl site on the 27th. I have really enjoyed this team and hope we get another chance to practice here at home. That'd be nice.”

With the Fall term complete, Swinney said he’s received good returns as far as where the players stand academically.

“I think we're all good. The early returns have been really good,” he said. “I don't have all of the grades. They compete amongst each other in position groups. 'Hey our group was a 2.94 or our group was a 3.0.' I think it's really good that they all take pride in it. We had some guys really, really excel. I'm excited to get all of the final grades. That's something we talk about as a team and these guys take a lot of pride in it.”

Defensive end Austin Bryant was in a yellow non-contact jersey Wednesday, but Swinney said he will be good to go.

“He's (Bryant) alright. Everybody is good except Judah (Davis). He won't be able to go,” he said.

“They're great. They're really doing well. Greg is progressing nicely. He's way over the hump. He's doing well. Then, Yeargin, he's been awesome. You'd never in a million years know that anything is wrong with him at all. I think he's really good. It's just one of those things that you're going to be very cautious with him all the way through. He graduated yesterday. He'll be ready to go, we hope for spring ball.”

On conversations with draft-eligible juniors

“I've had conversations with several of them because you want to give them the best information. There's a couple of them that I think have made decisions but there are a couple that are up in the air. That's one thing that I really appreciate about this team is these guys don't want to talk about it. I've had to force a couple of them to let's sit down because it's something that we need to really process. Let's take a minute and we'll get back in our world here. They're very committed guys and they're very focused and I love that about this team”

On scholarship numbers and roster management

“We're in a good spot with our scholarship numbers. We had five walk-ons that we put on scholarship and nine seniors. We're in a good spot. Guys that I know who are probably going to move on. We know Taylor (Hearn) has already made a decision and there are a couple of other guys who I think have a decision made. Then usually there's somebody that will walk in and tell me they're leaving that I don't know. I have no idea. I think we're in good spot roster-wise. We'll have a couple of spot in January but not many.”