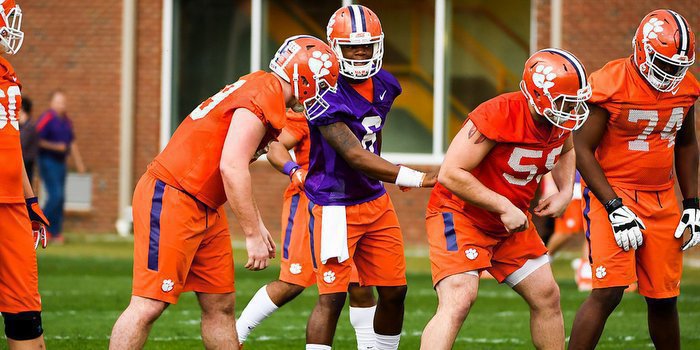 CLEMSON – Co-offensive coordinator Tony Elliott walked off the field following Wednesday’s scrimmage in Death Valley, and his demeanor was that of a coach who realizes that it’s still spring practice.

The Tigers scrimmaged for over two hours inside of Memorial Stadium, and Elliott said that he saw both good and bad during the session.

“Coming off the field, you never want to be too high or too low. I was definitely pleased with some things, but there are things we have to clean up,” Elliott said. “I really challenged the guys after our last scrimmage, just the leadership of the veteran guys. I thought we had great leadership today. We also had some veterans that we needed to make the competitive plays. I thought the quarterbacks put the guys in position to make some competitive, 50/50, plays and we didn't come down with them. I thought we ran the ball good, probably our best coming off the goal line sessions.

“Quarterbacks made some good throws and put together good drives to get the ball in the end zone. We did some good things in the red zone and in the goal line, we put them in some tough situations when they know what's coming. I thought the backs ran hard and we were about 50 percent on that. A lot of things to build on. Pleased coming off the field, but disappointed in some of the mental mistakes we had. Too many penalties and a couple false starts from our veteran guys, couple of holding penalties that were uncharacteristic."

Which quarterback stood out? 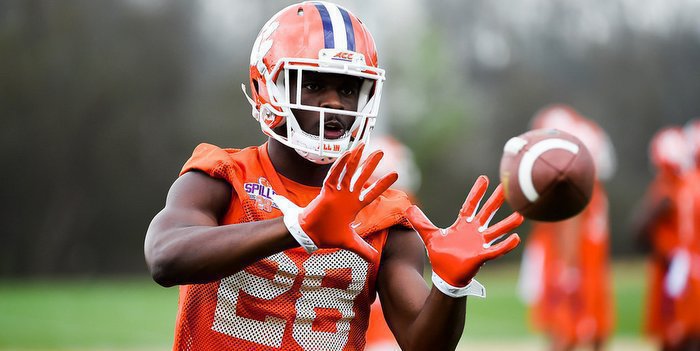 "Obviously Hunter (Johnson). This was the first time that he got a bunch of reps with the first team and let those guys run around and let the defense get after him,” Elliott said. “We saw him extend plays with his legs, he looked confident in the pocket and made throws to put together some drives. I thought Kelly (Bryant) did some good things, too. He ran the football and extended plays; guys just couldn't make the catch for him. (Zerrick) Cooper as well got in there and showed his ability to run and make some good throws."

Elliott said Johnson is beginning to take charge on the field.

"You started to see things slow down. When you have a young quarterback in there early on, they can sometimes get a little jittery,” he said. “They can look to the sidelines to confirm plays just to make sure they got it right, but he is now pushing the tempo. He's confident stepping in and calling plays to the offensive line. He's going to the right spot with the ball. If it is not there, he'd take off and extend plays with his legs. He also did a good job on designed runs."

Johnson, known as more of a pocket passer, made plays with his feet.

"He's definitely good outside of the pocket,” Elliott said of the freshman. “We really had the opportunity today to put him in some designed QB runs that we had for Deshaun (Watson) and Tajh (Boyd) in the past. We knew he was athletic and could run around, but we wanted to see how he would handle the designed quarterback runs. He made guys miss and broke some tackles which was encouraging to see."

He then said he was pleased with the improvement shown in the running game.

"Just the consistency of being able to run the football. Creating a new line of scrimmage so the backs can run hard,” Elliott said. (C.J.) Fuller had a really good day and (Tavien) Feaster probably had his best day running the football. There are things I've got to do better to help him from a pass protection standpoint. We had a little inconsistency up front with communication and false starts. We would get put behind the chains and when you do that against our defense, they are just going to pin their ears back. The positive was that we would get ahead of the chains on first down, but false starts hurt to get to second and long.

"I think after today, I thought Fuller looked the most at ease back there. I saw a different level of confidence in Tavien. He's a young guy and I am on him hard. He's trying to do everything perfect because I demand perfection. I told him to let it loose and go have some fun and play ball. He's got some work to do in pass protection. If they continue to play the way they are, then there isn't going to be much separation at the end."

Who stood out at tight end?

Were there any long runs by the backs?

"We had a couple coming off the goal line that were 15-20 yards. I have been coaching in those situations to not hit the home run, just take the base hit. They were able to find it and get us into position to give us the first down. Fuller popped one off the goal line and Feaster did as well. They were good, solid explosive plays. We gauge that by getting 12 or more yards."

Any of the younger wideouts stand out?

"Cornell made a couple plays and TJ Chase definitely caught attention today. Those were the two younger guys that caught the most attention."

"There were some up front from some veteran guys that were uncharacteristic. Too many false starts. You've got to change up the snap count against our defense because we have been going against them for 10 practices. It was guys not being comfortable with the snap count and too many veteran guys jumping offsides."

Who is stepping into leadership role

"Taylor Hearn. He is a guy that is trying to step into it. You're starting to see Choice be a bit more vocal. Fuller is a guy that now becomes more of a leader because of his consistency. He's got a lot of intensity and a much more accountable guy."