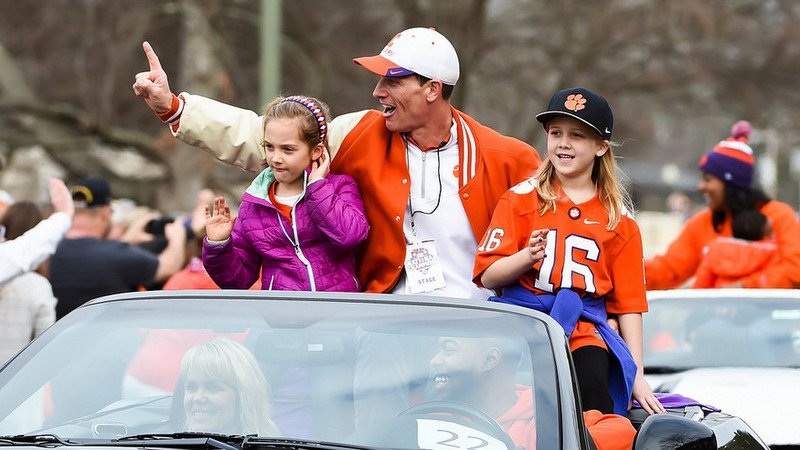 SUNSET – It might not be the dream of every little girl to be a linebacker for the Seattle Seahawks, but when you’re the daughter of Clemson defensive coordinator Brent Venables, it somehow makes sense.

Venables, Clemson’s tough, gritty, and intense coach, has two sons who are following in his footsteps. Jake will be a freshman linebacker on the team this fall, and younger son Tyler (at Daniel High School) is already drawing offers from around the country.

His two youngest children are daughters Laney and Addie, and both little girls have daddy wrapped. That’s the way it should be, and Venables told TigerNet recently that he wants to be the best dad he can.

“For me, that’s my biggest fear as a coach is the time constraints, but we’ve got it as good as it gets,” Venables said. “I want to be a great dad to them and I wake up every day wanting to be a great day for them and be there for them because I think those little girls, even more so than the boys, they need their dad. They’re going to look for a male figure in their life and I don’t it want it to be anybody else. It’s very intentional daily. Making sure they know that dad is there. Coach Swinney makes it easy.”

Both girls have grown up around the game of football, and while they love Brent the dad, they also love Brent the coach. They also love the perks that go along with being the daughter of a man who coaches at one of the nation’s most successful programs.

“We’ve done a good job raising those two. My wife is a coach’s wife. They are tough-minded little girls and they have their passions and the things they love to do. We have a great time with them.”

Laney not only loves the life of being a coach’s daughter, she wants to play the game.

“She wants to play linebacker for the Seattle Seahawks. Just ask her,” Venables said with a laugh. “She’s artsy and she’s a girly girl in the way she dresses but you watch her come out to football camp and she’s trying to get everybody to step up to her level, just ask her. She’s pretty aggressive.”