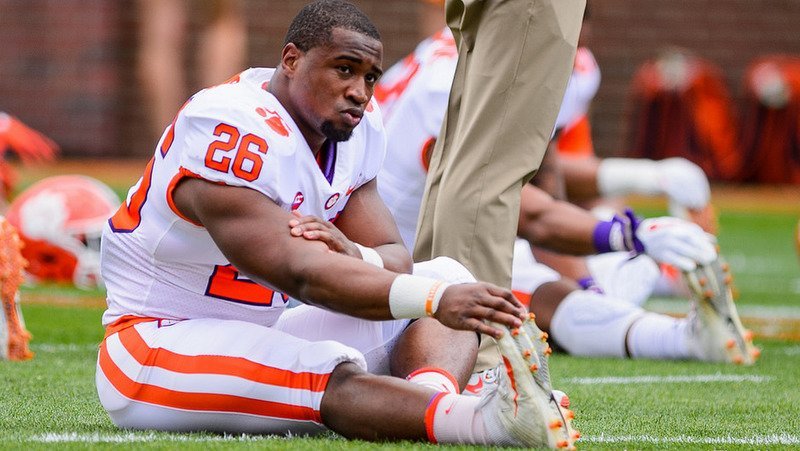 Adam Choice will get plenty of opportunities this season

CLEMSON – Family ties run deeper than even the most intense football rivalries, including Clemson and Georgia Tech.

Senior running back Adam Choice has had his share of ups and downs during his Clemson career, including earning the starting job as a freshman before tearing his ACL at Boston College, but lucky for the Thomasville (GA) native he’s had a couple of experienced cousins to lean on.

Choice is the cousin of two former Georgia Tech running backs – Joe Burns and Tashard Choice – both of who have been a constant presence and positive influence.

Tashard Choice was a Yellow Jacket running back from 2004-2008 and amassed 3,365 total yards and 28 touchdowns. He spent three seasons with the Dallas Cowboys before moving around to the Redskins, Bills and Colts. He carried the ball 372 times for 1,579 yards, caught 81 passes for 574 yards and scored 10 total touchdowns.

Burns – who completed his college career in 2001 – has been Choice’s sounding board for all things football, including trying to pick up pass protection techniques.

“Joe has kind of been more supportive of me than I could've ever hoped for. He's been with me every step of my journey,” Choice said of Burns. “Every time we talk, somehow football comes up. I'm not sure exactly how but we always end up talking about it. I remember my freshman and sophomore year, I was explaining how pass protection and all of that stuff was difficult for me.

“He was supportive and told me to just keep practicing, 'Of course, you're going to get thrown in the fire and run over sometimes, but just keep working at it.' He's always giving me tips and techniques and stuff to try. Over the course of time, I've become better at it and I owe him tons of credit for that.”

The older Choice and current North Texas assistant coach has helped Adam with off the field and life advice.

“Tashard, we recently started to talk a whole lot more. He's just giving me a lot of guidance,” Adam said of Tashard. “It's not really football stuff. It's more like life and what to expect with the game - the ups an downs of it. They both had great careers at Georgia Tech and they both played in the National Football League. They've just guided me mentally and physically on the field - what to expect, what to prepare for and how to go about perfecting your craft.”

Choice – who has rushed for 702 yards and seven touchdowns on – is looking to make the most of his senior season – but it all starts with having the right mindset.

“I feel like I can. Part of that is a mindset. It's not something that happens overnight. It's something that you have to be passionate about,” he said. “Talking to him (Burns), he's always told me he ran angry. Everything that troubled him or worried him that week, he laid it all on the field. I'm a calmer guy. I try to stay even-keeled so I can't see myself getting mad for no reason. I definitely believe that in certain situations where I need to be a powerful runner, I can do that.”

When he’s on the field, however, he tries his best to take the best of what he’s learned and seen from his Yellow Jacket family members.

“I don't feel like I run like either one of them. Joe - I don't remember him much at Georgia Tech but I do remember him in high school. I used to go to all of his games and I had his jersey,” he said. “I looked up to him. I just remember him vividly running through everybody. No matter who was in his way, he ran very powerful and very angry. Tashard was more of a do it all, get him in space and watch him work kind of guy. I kind of try to be like both of them but I can't say that I run more like one or the other. They both are special in their own way.”