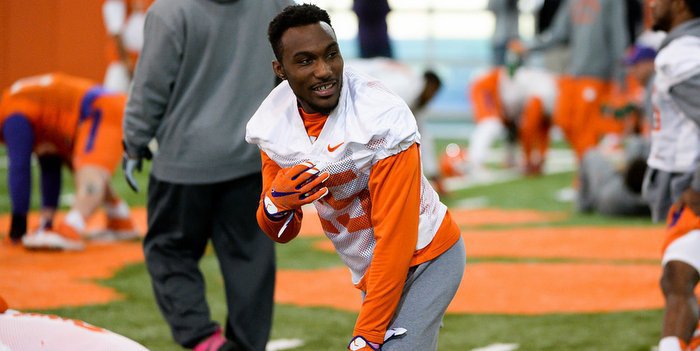 Tankersley will be counted on for leadership in 2016

CLEMSON – Cordrea Tankersley is one of the leaders of a young Clemson secondary, and he took a big step towards becoming the main leader Monday evening when he addressed the Tigers’ poor secondary play at the end of last season.

After all, the first step is admitting you have a problem.

Clemson’s heralded secondary gave up a quarterback rating of 138.08 in the final three games of the season – the ACC Championship against North Carolina and the two College Football Playoff games – after allowing a rating of just 80.36 through the end of September, a rating of 111.85 in October and 101.62 in November.

Tankersley – who has gone by the nickname Tootie since birth – was one of the few bright spots for the secondary in the late-season run and he has strong feelings about what went wrong last season.

“We were what - Top 10 – and we want to be number one. There are some things we have to refine if we want to be at the head of the line,” Tankersley said Monday. “We have the guys but they need to step up. We need to be more disciplined. I think we lost consistency toward the end of the year. I think we need to get better as the year flows and we need to work harder.”

What went wrong at the end of the year? Tankersley believes that some players began to think more about their NFL Draft stock and personal stock and less about the team and winning a title.

“I think that came from guys thinking about the draft and thinking about the first round,” he said. “I think those guys got distracted by that. I don't think we were where we needed to be as a unit toward the end of the season. We still went out and did our jobs but I think if we had the same hunger we had at the beginning of the season we would have handled things a little better than where we finished.”

Tankersley will be the anchor for a secondary that will have to break in three new starters this season, and he says it’s time for the younger players to grow up.

“I think we just have to grow up even more. We lost some great players in Jayron Kearse and Mackensie Alexander - those are some great dudes,” he said. “We just have to have guys like Marcus Edmond and Ryan Carter step up. They've been doing great this spring so far, but they just need to grow up. Jadar (Johnson) has been a great leader for us and that vocal guy and a guy who is very experienced and knows the game. I've been very impressed with him this spring.”

Tankersley even went so far as to say the group is “desperate” to prove they won’t be the weakest link on the defense.

As far as goals go, Tankersley has just a few.

“Try to repeat. There is always room for improvement,” he said. “I just want to work on my technique and be more fundamentally sound and even more disciplined and always be a student of the game.”