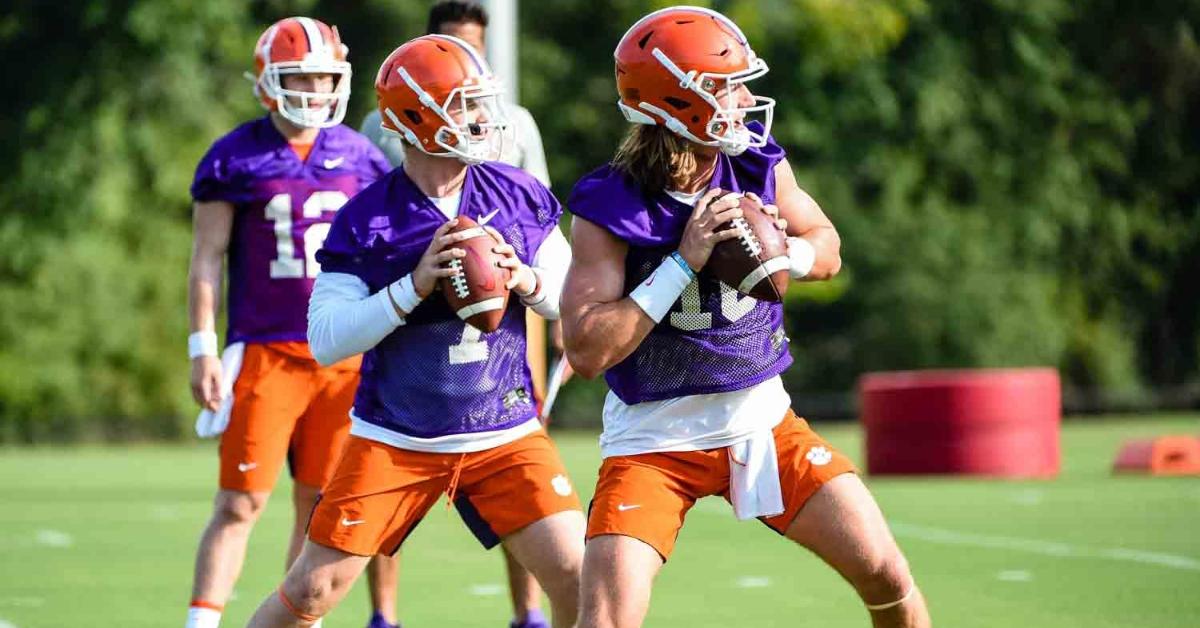 Trevor Lawrence and Chase Brice throw during an earlier practice

CLEMSON – The first of three stadium scrimmages the Tigers will hold this August takes place Saturday morning inside Death Valley, and co-offensive coordinator Tony Elliott is looking for his players to push through the heat and the minor injuries and make an impression.

Thursday’s practice, which was held indoors, lacked the pop and sizzle he’s used to seeing.

“It did not start with the same energy we had, but overall guys have been working hard,” Elliott said. “It picked up and we had a chance to challenge them. I think we got some good work in. We worked in different situations as we prepared for the scrimmage. But overall, the sense of urgency and enthusiasm has been there.

“Today got off to a little bit of a slow start, but we are about a week in and this is an opportunity for us to test them mentally and see where they are at.”

The Tigers have 120 players in camp and 80 of them are either freshmen or sophomores. Right guard Gage Cervenka said the older players have been trying to push the younger players along.

“It's been going good. It's going really good. I've been impressed with how we've done so far,” Cervenka said. “We have a lot of young guys that are really following behind our leadership. We are showing them the ropes and showing them how things go. Little things like jogging up the field and trying to get them to focus on the little things. I've been very impressed with how they've done.”

What does Elliott want to see in the scrimmage? Passion and intensity and execution.

Clemson opens the season on August 29th against Georgia Tech in the debut game for the ACC Network. With 19 days remaining before kickoff, Elliott knows the Tigers don’t have to be perfect.

“I told them we do not have to be perfect. We understand if they are not perfect,” Elliott said. “We have seven days of install in and each day is a day of install, so we really have not had time to go back yet. Next week, when we go into camp, we will go back and go over the things we put in early in camp.”