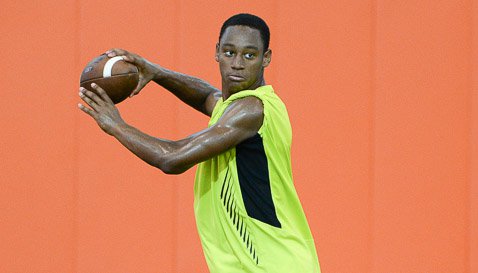 View Full Profile made his first trip to Clemson last summer, and his relationship with the Clemson coaches has picked up from there.

Nunez was in Clemson for Junior Day on Saturday, and he told TigerNet that he enjoyed being back in Clemson.

“I got there around ten and left around eight,” Nunez said Sunday. “It was a good experience to just get up there and be in Clemson again.”

Nunez and Morris’ relationship really began to grow after the Tigers offered him a scholarship and Nunez said that he enjoyed talking to Morris about where he could fit in Clemson’s offense.

“It picked up a little bit. It was good to get that offer from Clemson,” Nunez said. “My recruiting and my relationship with Coach Morris really picked up after the camp. I talked to Coach Morris a little bit while I was there. He was just talking to me about the recruiting process and how things were going. He was telling me that he really likes me and he loves my skill set.”

“I like Clemson's offense a lot. It gives me the ability to build in my running game and my passing game into the process,” he said. “That's the type of offense that I've really worked in this year.”

Nunez has a big spring planned for visits before he will figure out where some of his top schools stand.

“I'm going to visit Tennessee and Ohio State and Florida and Miami (FL). Clemson is in the mix somewhere, but I am not really sure where everybody stands yet,” he said.