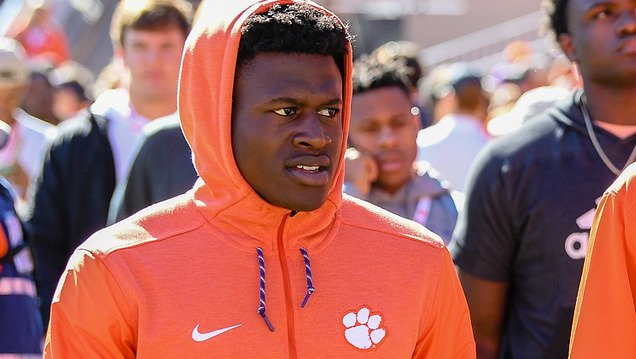 Clemson leads for one of California’s top playmakers.

Four-star 2020 running back Daniyel Ngata of Folsom (CA) received a Clemson offer a month ago. Ngata made a trip to campus for last weekend’s spring game to not only take another look at the Tigers, but to see his brother, Clemson wide receiver Joseph Ngata, play his first game in Death Valley.

“Everything went well. The trip was successful,” Ngata told TigerNet. “Talking to all of the coaches and all of the players went really good and, obviously, the spring game went really well. That all stood at me. Just the conversations with Dabo, Coach (Tony) Elliott and Coach (Jeff) Scott those are what stood out to me the most.”

Nagta was blown away by Clemson’s fans.

One highlight was seeing his brother lead all receivers with five catches for 127 yards.

“It made me really happy just seeing him do all of that, working his tail off and seeing all of the work he’s put in,” Ngata said. “He showed out in the spring game and having the most receiving yards in the spring game, I was really happy for him. Seeing him in person and seeing how big he’s gotten, how fast he’s gotten, it just shows that Clemson is working with him and with everybody else.”

The Clemson coaching staff made sure Ngata knows he is at the top of their list.

“I mostly spent time with Coach (Tony) Elliott. I was with him for about an hour before the game,” Ngata said. “After the game, me and Coach (Jeff) Scott caught up. He was just telling me that Clemson is taking two backs and they’re waiting for me. He was saying I can change a bunch of stuff in the offense, being a receiver out of the backfield and being a running back as well - just being a four-down back and playing the slot, too, if I’m comfortable with that. I feel really comfortable playing the slot and running back.”

The result of the visit? The Tigers stand alone as the leader.

“I think Clemson is my top school right now. I like them a lot. I talk to all of the coaches there,” Ngata said. “It’s just a really good environment. I had a long conversation with every single one of the coaches - all of the assistant coaches - and a few of the players before the spring game, so it was really good to talk to them and learning about the program and all of that.”

Ngata met with one of the other top running back targets – Florida prospect Demarkcus Bowman.

“I saw him at the end - him and D.J. (Uiagalelei). The coaches introduced us to each other. We were just talking. That’s another running back target they want to get, too,” Ngata said. “D.J. (Uiagalelei) - he’s a big target for them. It could be the top recruiting class in the country. They’re recruiting all of the best people at each position, so I think the Clemson recruiting class right now is really good and is really high up.

“I think Clemson stands really high on their (Bowman and Uiagalelei) lists as well. I was talking to them and asking them how they liked it, just trying to see what their view was and they pretty much have the same view as me. They liked it a lot. All of the coaches, they really like them. It was more than football. They were just talking about everything outside of football - what do you like to do in your free time, family, just trying to get deeper in with you - so we all liked that a lot.”