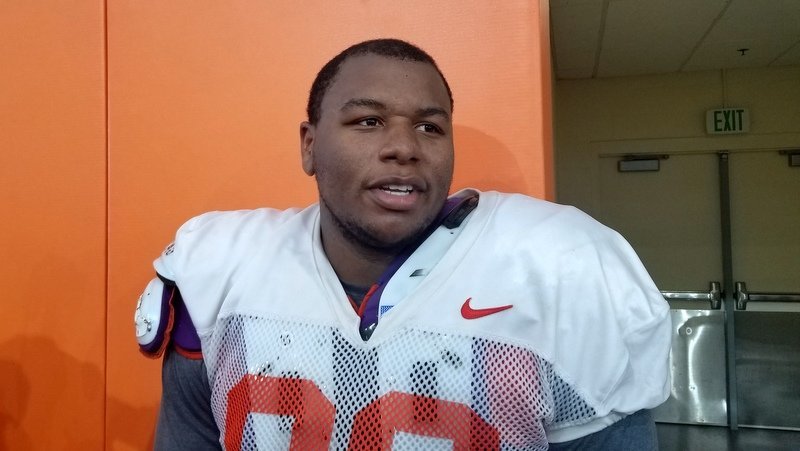 Lawrence talks to the media after Tuesday's practice

CLEMSON - Dexter Lawrence has earned accolades, awards and been named to several award watch lists, a testament to the talent of the North Carolina native. Imagine what Lawrence can do if he’s finally healthy.

Lawrence met with the media following Tuesday’s practice, and he acknowledged he played most of last season in pain. A pain-free Lawrence hopes to be a terror on the defensive line his junior season.

“Last year around this time, I basically had a club foot - or at least that’s what Christian (Wilkins) calls it. I can get on my toes again,” Wilkins said. “I can bounce on them. I can move. I’m getting my speed back, so I’m feeling good.”

He noticed he was feeling good and at 100-percent in early July.

“Probably like a month before camp. That last summer session, I was keeping up with the guys on the sprints and things like that,” Lawrence said. “I was in the training room and I was walking on my toes and I was like, ‘Woah, okay.’ It kind of came out nowhere. All the time, I was building my strength but the feeling just came back.

“I would say I was probably 45-50-percent last season, but now I’m feeling much better. It was a big turnaround for me. It’s a blessing. I got a little down and wondered if it was ever going to come back, but I just kept with it and now it’s coming back.”

Lawrence said a nerve block caused further problems for his leg and foot.

“I had a nerve block during surgery and it irritated some of the nerves in my leg and foot and it took a while for it to come back,” he said. “I’ve never dealt with anything that serious. I’ve had rolled up ankles, but nothing that serious. I had every guy on the team pushing me through it, making sure I’m going to rehab and keeping me accountable.”

Unable to practice like he wanted to practice, Lawrence worked on other parts of his game.

“I just made it more a mental game. I wasn’t there all the way physically, so I had to work on different things like my knowledge, my hands,” Lawrence said. “I couldn’t move my feet that well, so it was more of the upper body things that I had to focus on and get better at. Once I got my legs back over the summer, I started working on that again.

“I didn’t really get down. I had to talk to my mom a couple of times and she was telling me to be patient and just keep doing what I’m doing. Months at a time, I could see it coming back. It was immediate. It was more of a marathon than a sprint.”

Now, he’s healthier than at any point since the end of his freshman season.