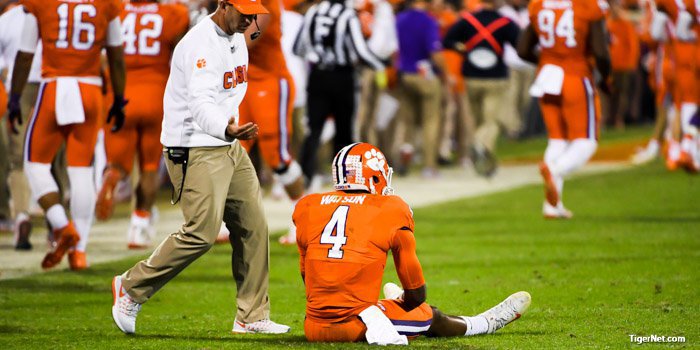 Watson poses with Dabo Swinney before the game

CLEMSON – Deshaun Watson set program and ACC records Saturday afternoon in Death Valley, setting records for throws, completions and yards, but it was two throws that were completed to Pitt defenders that tell the story of Clemson’s shocking loss to Pitt.

Watson completed 52-of-70 passes for 580 yards and three touchdowns as Clemson gained 630 total yards of total offense, but he also threw three interceptions, two in the endzone that thwarted Clemson scoring chances. The picks were a microcosm of a frustrating season that has seen a Watson different than the one we saw last season – long bouts of brilliant execution and pinpoint accuracy followed by moments filled with confounding throws and head-scratching decisions.

Watson stood in the hallway outside of Clemson’s locker room following the loss, and answered the tough questions sent his way, the major one being: How do you and your team recover from this?

“Just go dominate. Put this one behind us and come in tomorrow and watch the film,” Watson said. “Come Monday, we'll start over. It's a new season because it's a one-week season and we'll get ready for Wake Forest. Hopefully, we can clinch the ACC and punch our ticket to Orlando next week.”

Watson admitted that Saturday’s loss hurt, and followed that by saying this is where he has to be the team’s leader. 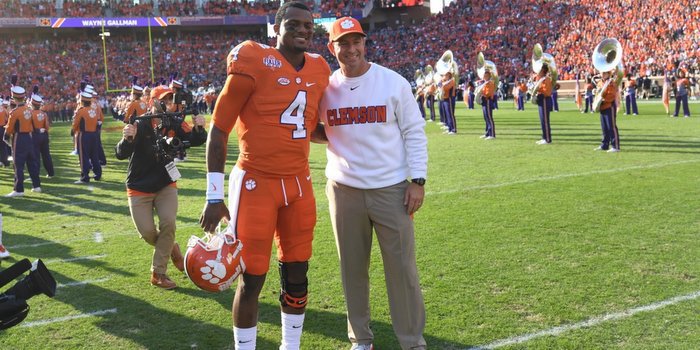 Watson poses with Dabo Swinney before the game "

“Of course, people are hurt. We haven't experienced any losses like that in a long time, especially at home,” he said. “I'm just trying to pick everyone up and tell them to keep their heads up, knowing that people aren't perfect. It's just football at the end fo the day. We are all still breathing by the grace of God and still being able to walk. Prayers up to Scott (Pagano); hopefully he's good. Everyone else came out pretty healthy and still able to walk and move around. At the end of the day, the attitude is still positive and still there. We still have a lot of football left.”

The records? They don’t matter.

“It's all good but at the end of the day, my main focus is trying to get the W. I just wanted to win,” Watson said. “I could've gone 0-for-30 and had zero passing yards and get the W. That's all that matters. We made a lot of plays and did a lot of great things, but at the end of the day we made a couple of mistakes that kept them in the game. Give credit to Pittsburgh. They came down here and earned it after a tough loss last week at Miami. They came down here and they didn't shy away from the challenge. You've got to give them credit. They came in and out-played us made more plays at the end of the game. That's pretty much it.”

The game took its penultimate, desperate turn when the Tigers failed on 4th-and-1 inside Pitt territory with a minute to play. Instead of a pass or a Watson run, the ball was pitched wide to running back Wayne Gallman, who was stuffed short of the marker.

“That's a coaches' decision. There's a reason behind all of that stuff, but we're not going to get into all of that. We had two chances and Pittsburgh stood up and out-physicaled us,” Watson said. “They made the plays and we didn't. That's pretty much it. You've got to win your matchup. You just want to compete. It's a game of matchups and we didn't win our matchups. We wanted to seal the game, regardless if we got the first down or if we punted. They were going to have to gain more yards but there would've been time on the clock. We just wanted to try and seal it. It's out of my hands and I'll leave this to the coaching staff.”

The critics of Watson’s performance will be both loud and vocal this week, but Watson said he doesn’t care.

“I don't really care what people say. At the end of the day, we're not perfect,” he said. “We try to be perfect, but I'm a human being. People are going to make mistakes and it's a learning lesson. Everything isn't going to be a beauty pageant. I'm going to learn from it and watch the film and just move on. I don't really care what people say, regardless if it's good or bad. I just do what I've got to do and handle my business and try to get the W.”

Watson said he knows there will be criticism, and he knows how to handle it.

“Just keep moving forward. Don't shy away from the adversity and the criticism. Run to it,” he said. “Adversity brings out who you really are and your true character in how you handle it. We're not going to shy away from it. We're going to attack it and go back to work and get ready for Wake Forest.”

One reporter asked Watson how he would respond to the mistakes, and Watson took umbrage with the question.

“Just make plays. I know where you're coming from. You always want to talk about the negative things and I've experienced that in the last two-and-a-half years. Everyone see the interceptions or the fumbles. We've just got to take care of the ball and make plays,” Watson said. “Things are clicking. We've got to capitalize on our opportunity. At the end of the day, we're not perfect. The game isn't going to always be a blowout. People game plan just like us. The other teams are on scholarship. The other team has great players.

“The other team watches film and we have the same amount of time. We're not a team that a team overlooks and half-assed throughout the week. Each team wants to dominate and come in and beat us. That's what Pittsburgh did. They came in and game planned and made some plays. At the end of the day, they made the last play to seal it off. Each team, no matter who we're playing is going to give us 100-percent. We've just to go out there and play ball.”

He ended by saying he’ll keep smiling through the bad times and the adversity.