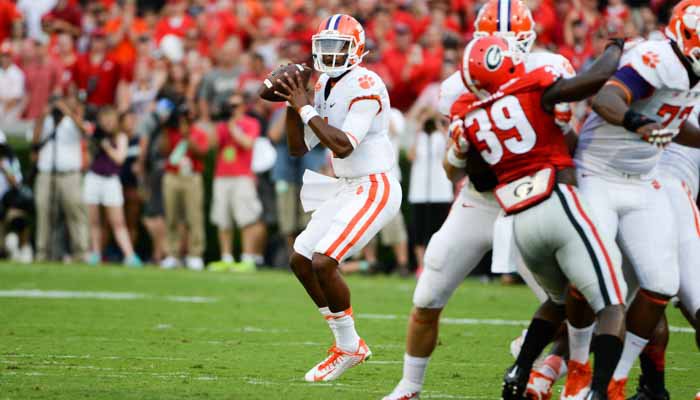 Watson: "I can lead this team to victory"

CLEMSON – When the fifth ranked Florida State Seminoles rolled into to Death Valley a year ago, Deshaun Watson

Unfortunately for Watson and the Tiger football program, the Seminoles left Memorial Stadium with a 51-14 victory. However, as the clock hit zero the Gainesville (GA) native had that same gut-wrenching feeling that the players and coaches can’t describe.

“The only the memory that has been in my mind is that we took the loss,” Watson said of the 2013 game against the Seminoles. “Being committed to this program, you feel like you're already on the team. Every loss and every win is that feeling you get that you can't really explain. I took it personal and I worked my tail off. My teammates have been working all summer, too. This year we've got to change it and go down there and execute and get a W.”

This year the tables have turned as Clemson travels to Tallahassee to take on the defending national champions, and Watson told the media Wednesday that he and his teammates realize they can make a statement with a win Saturday night.

Watson, who has completed 10-of-13 pass attempts for 213 yards and four touchdowns, while rushing for 33 yards on 10 attempts, credits his ability to pick up the offense with his enrollment in January for his early success.

Despite playing behind senior quarterback and first-year starter Cole Stoudt

Chad Morris
Offensive Coordinator / QBs
View Full Profile is preparing him as if he will start each and every game.

“It's been a lot. I'm surprised that I've been picking it up pretty well and I think they are, too,” Watson said. “He's been preparing me like a starter because you never know when that time will come or if Cole happens to go down. I have to step up and lead the team to a victory.”

So, if the time comes that Watson must step in the huddle and lead the Tiger offense down the field for a game-winning score, Watson said he has complete confidence that he will get the job done.

“It's just football. It's something that I've been dreaming about since I was a little kid. This moment is here,” Watson said. “If that time comes and I have to lead the team to a victory then I'll just go out there and do it. I just go out there and have fun. You can't think about all of the pressure. The pressure comes from not being prepared and I've prepared for this moment. I'm very confident in leading the team down in every moment and every situation in the game. If that moment comes, I'm very confident that I'll come in and lead the team down to score.”