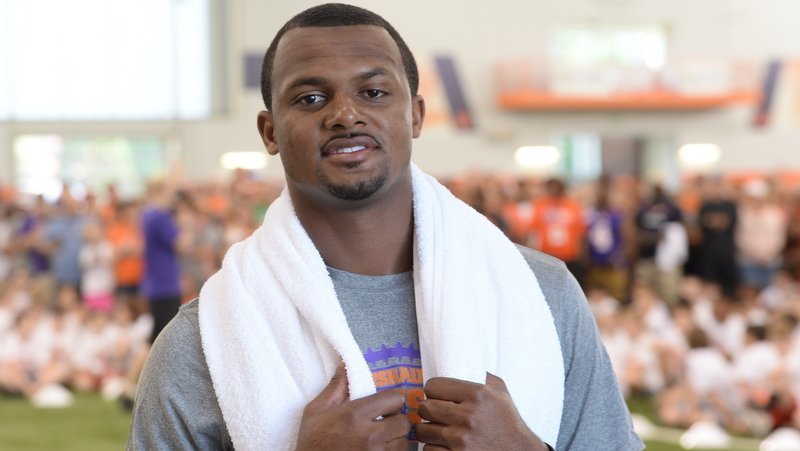 Watson talks to TigerNet before his camp last Saturday

CLEMSON – Deshaun Watson was back in Clemson last weekend, familiar ground for the Houston Texans quarterback who thinks the Tigers are on the verge of stacking National Championships.

You make exceptions for National Championship quarterbacks, however.

“It's a blessing. It's great to be able to come back and enjoy some time,” Watson told TigerNet in an exclusive interview. “It's not too often that I get to come back to Clemson, the place I call my second home, and just enjoy the memories and the energy. It's always good to be able to come back, and I appreciate Coach Swinney letting me use the facilities. Usually, that doesn't happen for athletes, but I am grateful that he let me use it. I am thankful for it.”

Watson said he tried to keep with up with the NFL Draft to see not only who the Texans took, but to see where many of his former Clemson teammates were taken.

“I was on a flight to Costa Rica, and I had the Wi-Fi on my phone and I was playing with it and trying to keep up with it, and it kept going out,” Watson said. “It was awesome to see those guys get drafted where they got drafted. I feel like each situation is going to be good for them. I texted each one of them. The Clemson product is all over the NFL, and we are proud of that.”

Watson also believes the Texans improved as a team, and he hopes the new additions are ready to make an impact.

“We did. The whole team. The offensive line, quarterback, receiver - we have competition all over the place. It makes for a healthy roster,” he said. “It kind of makes for a good competition and hopefully we get better, and those guys will come in and be more than ready.

“In the NFL it's all about the details. In the NFL, you lose more games than you go out and win because you don't pay attention to the details. There are two or three plays a game that can decide a win or a loss. You have to focus on each play and make sure you do the best you can.”

I asked Watson what was one thing he’s learned in the NFL, and he smiled and said that while he took one too many shots at Clemson, he now understands that in the NFL a quarterback is better off sliding.

“Slide. Take a slide. The biggest thing is not to take that hit,” he said with a smile. “You have to keep your quarterback healthy in the NFL, and if you can slide or get out of bounds and not take that big hit you are better for it.”

Watson was on the sidelines for Clemson’s win over Alabama in January, and he thinks the two titles n three years are just the beginning.

“It was awesome to see those young guys go in there and do what they did. They handled business. They went in there with a business mentality and with the thought of not just winning the game but dominating,” he said. “They played very well that night and came away with a championship. We have to continue to stack some more of those.

“Coach (Dabo) Swinney has always said that all we needed was one, and once we got one we would get two, and then once we got two, it would be three and so forth. This is just the beginning for Clemson.”