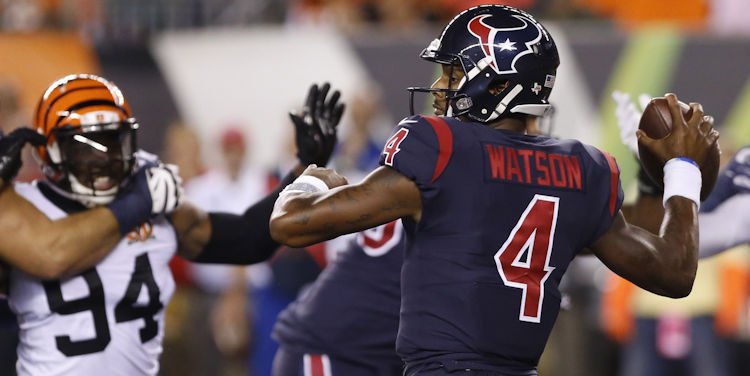 Deshaun Watson’s first NFL start wasn’t perfect, but it was good enough to get the win.

The former Clemson quarterback made his first professional start a memorable one. Playing on his 22nd birthday, Watson helped lead the Houston Texans (1-1) to a 13-9 victory over the Cincinnati Bengals Thursday night in Paul Brown Stadium in Cincinnati.

Playing behind a patchwork offensive line, the Watson and the Texans were also hindered by injuries – their top three tight ends were out and they played with just three wide receivers.

Watson finished the evening with a respectable line, completing 15-of-24 passes for 125 yards. He added 67 yards on the ground on five carries. Former Clemson receiver DeAndre Hopkins led Houston in receiving with seven catches for 73 yards.

“This is special. Looking back, from when I was a little boy, this is what I’ve dreamed of,” Watson told the media after the game. “I’ve always told people I wanted to be an NFL player, and they’ve always asked me what my backup plan was and I told them I didn’t have one. I figured that was the only way out of my neighborhood. This win isn’t just for me. This is for the whole city of Houston, the team, the fan base and the people back home in Gainesville, Georgia.”

His biggest play, however, came because of his legs and not his arm, and it came just a few players after Cincinnati defensive tackle Geno Atkins planted Watkins in the Paul Brown turf. Watson put the Texans ahead 10-3 with 50 seconds before the half. Facing third down, he was flushed out of the pocket and broke free for a 49-yard touchdown run. According to the Texans, it's the longest run by a quarterback in franchise history.

“That was a good play,” said Texans head coach Bill O’Brien. “He didn’t see anything open down the field and they were in a Tampa (two high safety) coverage, he saw it and he took off. He can run and he’s a very instinctive runner and he did a very nice job on that play.”

The Texans added a field goal in the second half and let the defense do the rest on a night when defense was the dominant topic. The Bengals and Texans combined for 16 points and 318 yards, and nine of the first 12 drives ended in punts. The Texans averaged 4.3 yards per play. The Bengals averaged 4.8 yards per play. The two combined for 774 punting yards.

The Texans are back on the road in week three as they travel to Foxboro, Mass., to meet the reigning champion New England Patriots on Sept. 24.