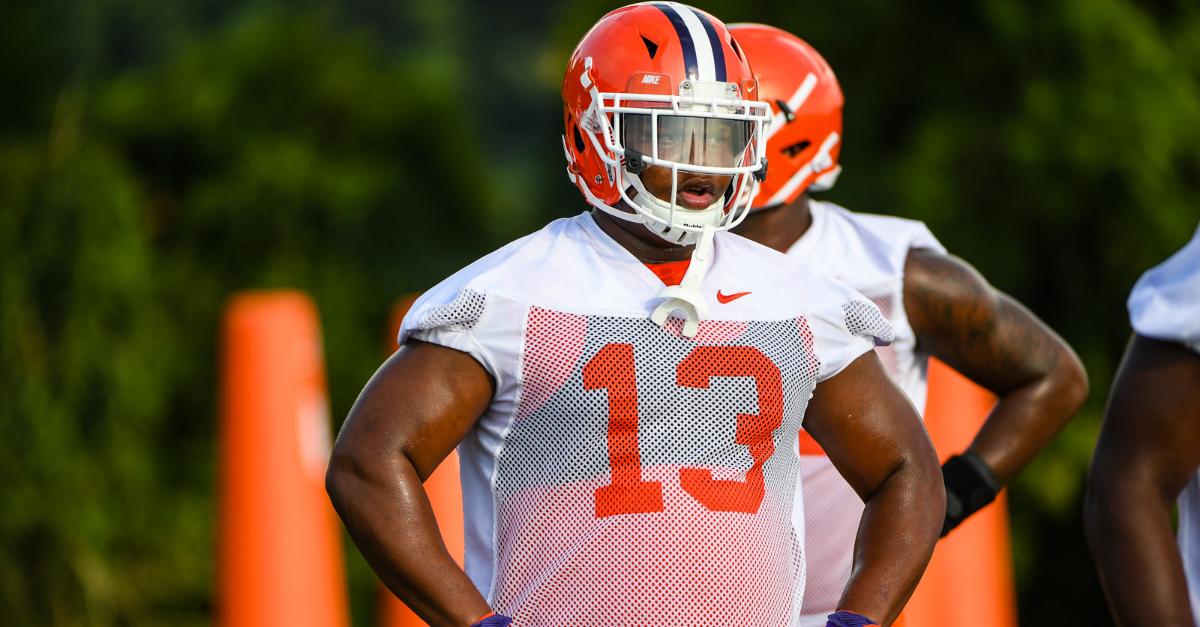 CLEMSON – Clemson head coach Dabo Swinney didn’t know what to expect out of defensive tackles Nyles Pinckney and Jordan Williams heading into August camp, but he’s been pleased with what he’s seen so far.

Pinckney and Willams missed all of spring practice recovering from offseason surgery, and Swinney told the media Monday he didn’t know what he would see when August camp started a few weeks ago.

“The biggest thing was just where they’re going to be physically and what was their confidence going to be like, and all that type of stuff,” Swinney said. “Just were they ready to go cut it loose, because they hadn’t played football since last January. They’ve done well. Nyles has been excellent. He’s a fourth-year guy, and he looks that way. He just carries himself that way, and he’s played some good football for us. His knowledge and understanding of block recognition, protection recognition, the little things that just come with experience and knowledge. He’s really done a good job, and he applies that.”

Swinney went on to say that Williams has talent but isn’t the best player.

“Jordan has done a nice job. Jordan might be the most talented guy, but right now he’s not the best player, yet. But he’s going to be a sophomore,” Swinney said. “He didn’t get to play as a freshman, and then last year he showed some things and got a little bit of experience, but he’s still a work in progress. He’s still figuring it out. I think he’s set up to have an excellent year; he’s going to get better and better. He just needs to play and get some experience. There’s a lot of things consistency-wise and just technique and fundamental-wise that he’s still got to grow into. But tool-wise and ability-wise, he’s got it all. But he’s still a work in progress. This is a guy that’s going into his second season to play. I think he’s going to make some big strides throughout the season.”

He then said he thinks that while the defensive tackle spot lacks experience, the coaches have developed depth there and at defensive end.

“I think we’ve created some depth there, which is good. That was one of our biggest things going into it. Could we create some functional depth? We’re talented, but making that talent functional is a big challenge for us,” Swinney said. “And I think we’ve been able to do that. I think Tyler Davis, he’s as good as we’ve got. He is really advanced, and a guy that has earned our trust in any situation. Darnell Jefferies, Xavier Kelly, those guys have made some really good strides for us. I’m really encouraged by the guys that we’ve got. The reps may not be even, but the depth has been good.

“And same thing at defensive end. We’ve got five guys that have become functional for us. I think that position, more than any position is going to continue to play out on game day. Sometimes that’s what it takes, you get to games and some guys separate a little bit. Some guys stay the same, and some guys get a little worse. It’s always an interesting dynamic to watch, but we’ve got good competition and good enthusiasm. We’ve created the functional depth, now we’ve just got to go play. Then we’ll see where we are and what we’ve got to do to move forward.”