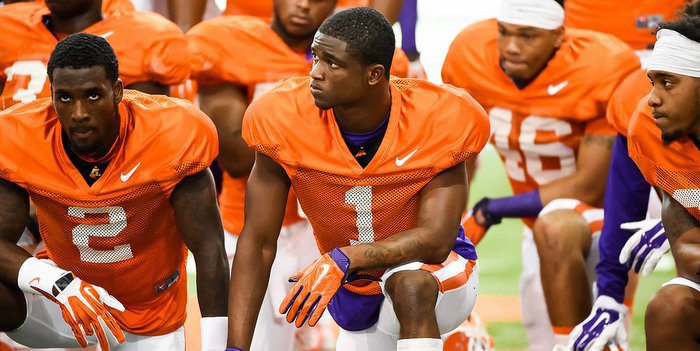 Trayvon Mullen (1) has been a standout so far

CLEMSON – Dabo Swinney says his defense is trying to survive instead of thrive, and it cost them on Saturday.

Clemson’s head coach met with the media following Monday morning’s abbreviated practice at Jervey Meadows, and said he wasn’t pleased with his defense in Saturday’s scrimmage and he wants to see a different mindset from that group as the fall camp portion of August practice comes to a close.

“I wasn't really pleased with anybody defensively the other day. Maybe Jadar (Johnson). Or Tre Lamar. As a whole, we just gave into it Saturday and didn't have the right mindset,” Swinney said. “They got exposed Saturday. They were trying to survive instead of thrive and got their butts kicked. You can't hide out here. We have some work to do.”

Swinney said he was pleased with some members of the secondary, including senior safety Jadar Johnson and freshman corner Trayvon Mullen.

“Jadar has been very solid, and I am excited about him. And Van (Smith) has been solid. Those safeties have been good,” Swinney said. “We are going to be fine. We need to get that other corner spot - Mark Fields is as talented as any guy we've got. But he has to become an everyday dog, learning the details of the position and not just being an athlete. He has to learn to be a technician. He has done a lot of good things in camp, but if you take your foot off the pedal out here against the guys we've got it won't be pretty. And then Trayvon, I love that guy. He's just a guy that's learned how to play. Great player. Great competitor. He wants it. And when you have a guy like that it's going to happen for him. We are trying to find the best place for him - do we use him as a nickel or dime guy, or use him some at safety, or do we throw him in at corner. He and Ryan Carter give us the most versatility in the group.”

The Tigers returned to practice Monday and worked on special teams.

“This is our last two-a-day. It's hard to believe it's been two weeks, with two weeks of camp behind us. We will have a full-pad practice tonight,” Swinney said. “We didn't have any of our freshmen out here, they were all in a university required event they had to be at today. They will be back for tonight's practice. Today was just some special teams and then team separate stuff, just correcting some mistakes from the scrimmage the other day. Tonight we will ramp it up and have a tough practice tonight. We are just trying to keep our heads down and finish down, because once classes start on Wednesday you flip the script. You have the 20-hour rule and days off and you don't have them all day. We still have a good amount of work to be done but we have a good plan in place and we will go from there.”

“We still have some time before we have to make those decisions. We have special teams that will dictate some of that. The next week of practice will dictate some of that, and we have another big scrimmage Thursday. And then once we get into school and slow down a little bit, we can revisit things for players like Xavier Kelly, who are mentally just fried. Will that help them as we get dialed in on an opponent and not running an entire season's worth of install? And then hopefully we can stay healthy. Right now we have some guys that we as coaches know are going to play, and then we have some guys that we know for sure are going to redshirt. And then we have a group of guys that are on the bubble. The one good thing about our schedule is we don't have a conference game until game four. Last year we had Clelin Ferrell ready to go, but we held him until the sixth game and then we were able to redshirt him and I am glad we did. If we had lost a guy midseason we might have had to use Clelin but we stayed healthy all year, right until the Orange Bowl. Some of them it will be a while until we are able to make a decision.”

What was the problem with the defense Saturday?

“Tre is a guy for sure, he isn't far behind those first two at backer. He's nipping at their heels. It has just clicked for him. He has grasped everything and he looks like a veteran player out there. There is no doubt he will be a factor on this team. He is going to play.”

Getting Marcus Edmond back

“I think he's close. They were going to stress him a little bit today and tomorrow and see where he is. I am hopeful by next Monday he can be back and have two weeks to get ready for Auburn.”

“He is doing good. You never know when guys make that transition. Right now, he's light in the britches for a tight end but that sucker will put his hat on you. He is tough. He has no fear. Shadell is going to be just fine. He is just going to have get a little more meat on him and get a little stronger, he will. He is a very committed player, and he's very committed to this program. He's committed to being a good football player. I don't know if he will have a very big role this year, but with what I've seen I am very encouraged. He's never done PAW drill, and you wonder how he will respond, and he's done a great job. He won't have to be 250 pounds, but he needs to be about 230 or 235 pounds to be the kind of player we need him to be. But he has four years left.”

Tight end D.J. Greenlee missed practice as he recovers from a slight concussion he suffered during the scrimmage last Saturday. Hunter Renfrow, who missed the scrimmage with a hamstring injury, was back at practice Monday morning.