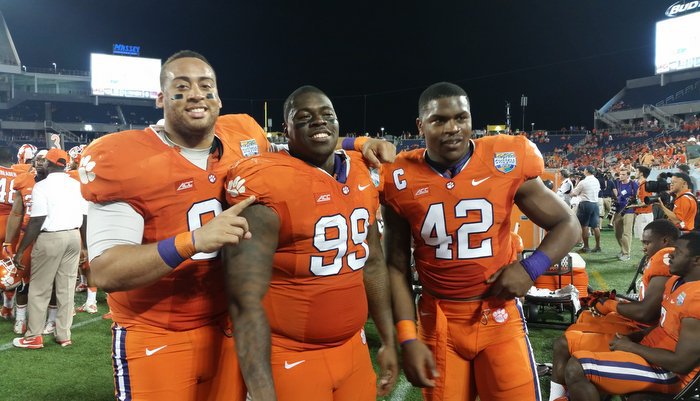 DeShawn Williams
Sr. Defensive Tackle
#99 6-1, 292
Central, SC
View Full Profile , and in the interview room following the Tigers’ 40-6 pasting of Oklahoma Williams intertwined his thoughts on the past with his dreams for the future of the Clemson program.

“It really hasn't hit me. Graduation hasn't hit me,” Williams said after the game. “But I do realize that was my last time wearing that uniform and now it's on to the next step. A lot of blood, sweat and tears went into that. But it was worth it to see their smiles. Those are my brothers.”

A win in his final game as a Tiger made the moment even sweeter, and the fact that the Tigers were a prohibitive underdog was icing on his birthday cake.

“It was good. Nobody gave us a chance to win. I think we had like a 25 percent chance of us winning and to top it off with a win on my birthday? It couldn't get any better than that,” Williams said. “It was big to win, but to win like we won? We were dominant from the first whistle and we kept the pressure on.

“We are not a top team, and nobody thinks the ACC can play with the SEC or the Big 12 or the Big 10. We've heard it every bowl game. That just throws fuel to the flames and we just want to go out there and make a statement.”

Williams and his defensive teammates finished the season ranked as the top statistical defense in the nation, something that was a goal prior to the start of the season.

“It's crazy, because that is a goal that Coach V ( Brent Venables

Brent Venables
Def. Coordinator / Linebackers
View Full Profile ) gave us,” Williams said. “We all had to write out what our goals were, and everybody wanted to be the number one defense. It's crazy how it played out. It took a lot of hard work and dedication and accountability. We have a lot of senior guys, and we knew what it took to be number one. We showed what we can do, and we are number one. They can't take that away from us.”

That same defense loses eight starters, but Williams says that not only does he think the defense will be fine, he thinks the program is about to win a national championship.

Jabril Robinson
Fr. Defensive Tackle
#96 6-2, 255
Leland, NC
View Full Profile , and D.J. (Reader) and Carlos (Watkins) are going to have to step up. Shaq (Lawson) will do what he has to do. Then you have Kevin Dodd

Kevin Dodd
RS So. Defensive End
#98 6-5, 275
Taylors, SC
View Full Profile . I will put my money on this team winning the championship next year, especially with the offense they are going to have. The whole thing.”