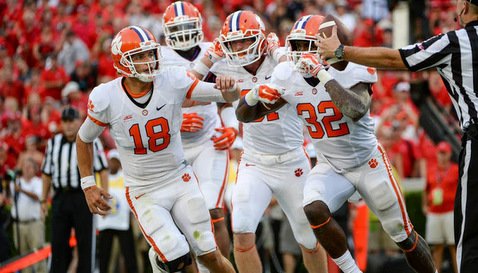 Davidson celebrates after scoring against Georgia

C.J. Davidson
RS Jr. Running Back
#32 5-10, 203
Clemson, SC
View Full Profile might not have gotten the start at running back last Saturday against Georgia but when his number was called, he made the most of every opportunity.

The redshirt junior out of Central (SC) was Clemson’s leading rusher in the 45-21 loss to the Bulldogs with 12 carries for 43 yards and a touchdown, while adding two receptions for 17 yards. However, Davidson said that his performance last week is only the beginning and he wants to prove what he can do on the field.

“It's was a great experience,” Davidson told the media earlier this week. “It was probably the most carries that I've had since high school and the amount of time being in a game since high school. As the game went on, I started getting more comfortable running the ball and with the offense. It was good. I'm going to take that game and run with it.”

Despite getting to most game action that he’s seen during his college career, Davidson said that he was calmer than he expected – mostly due to the encouragement of his teammates.

“The experience was great. I wasn't as nervous as I thought I was going to be, because I felt like I was prepared enough and I worked hard enough to be in that position,” Davidson said. “All of my teammates made me feel comfortable out there. It helped me tremendously to be able to execute and play good.”

Davidson said that he wants to continue to build on his week one performance.

“I'm just going to continue doing the same things that I've been doing,” he said. “When the opportunity is there, I'm just going to go out there and give it all that I've got. I just want them to be able to trust me and know that when C.J. is in the game he's going to know what he's doing and he's going to give 100 percent. If I keep that mentality and keep that work ethic, then my carries and my role will probably increase.”

Eventually, he hopes to have the opportunity to expand his role as Clemson’s top rusher – carrying the load for Clemson’s offense.

“If that ever happens, I guess we'll see,” he said. “I felt good and still felt like I had a lot in me when I finished the game. I feel like my body can take it. It's just a matter of getting to that point to see what's really going to happen.”

However, he knows that he still has a lot of work to do before he can become, “the guy.”

“Definitely in the return game - blocking and different schemes,” he said. “As far as the offense, I probably need to be a little bit more patient in finding the holes. Just settling down and getting more comfortable earlier in the game.”

There is one thing for certain, though: If C.J. Davidson sees the endzone, he’s going to do everything in his power to get across the goal line – even if it means return to his track days and jumping over the pile.

“I don't know if track helped me or not,” he said with a smile. “I did the long jump and triple jump, but not the high jump. When I see the endzone, it's just whatever it takes.”