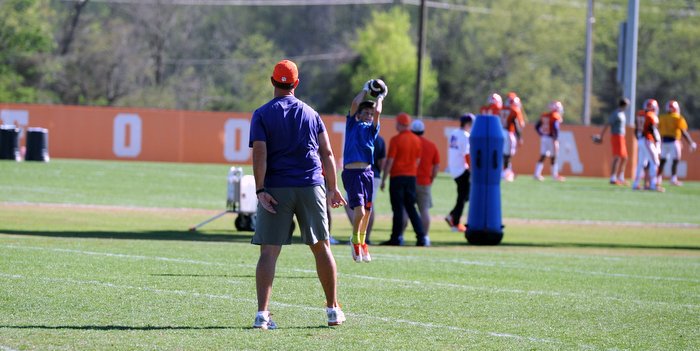 CLEMSON – The young wide receiver lined up at the line of scrimmage, heard the quarterback bark the snap count and pushed off from his starting spot. He deftly juked out an invisible defender, planted his right foot in the ground and went left on a skinny post, the ball delivered in stride and on time for a touchdown.

The young wide receiver? Clay Swinney, the youngest son of Clemson head coach Dabo Swinney. The quarterback? Swinney himself. It was a scene that played out during the Tigers’ tenth practice Monday afternoon, with Swinney taking the time in between sessions to toss a few with his youngest son and do a little coaching as Clay prepares for a flag football season.

It’s about doing the difficult things on difficult days but always making sure you take care of people. It was a lesson brought home late last week. Swinney delivered the eulogy for friend and former teammate Kevin Turner this past weekend and attended the funeral of his aunt on Tuesday. 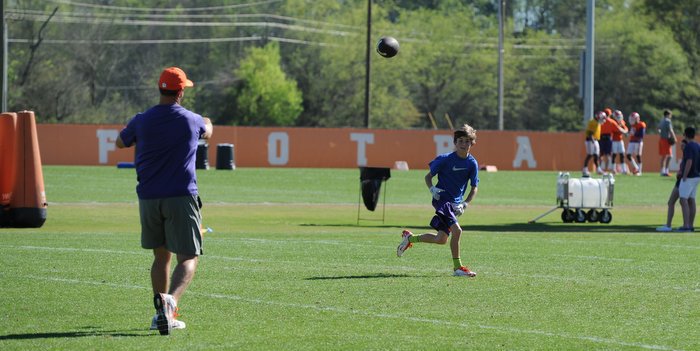 Turner – who battled ALS – is the father of Clemson 2016 signee Nolan Turner, and Swinney reflected Monday about a trying few years personally.

“It's been a tough couple of years for me just family wise and an emotional rollercoaster. I've got to go to a funeral tomorrow because I lost my aunt – my mom's sister – Friday,” Swinney said. “I had a funeral yesterday and I have a funeral tomorrow. It helps you keep the perspective that you just have to enjoy life and cherish our time that we have here and make the most of it and try to live with no regrets and appreciate your time with your kids while you've got them.”

No regrets. Take time with Clay for a little catch.

“Our kids are on spring break so most of them are roaming around. Clay and I had a little individual period today because he's getting ready to start his flag football team.” Swinney said. “I took the practice schedule and I told him, 'Okay, these two periods, we're all going indy (individual). So me and you are going to have a little indy period.' It's a lot of fun to be able to do that.”

To Swinney, the word ‘Family’ is all encompassing – his coaches, players, former players, former teammates and friends – which is why it was an easy decision for Turner to turn to Swinney and ask him to help look after his children in his absence.

“Let me be realistic for a moment. Most likely I won’t see Nolan graduate and there’s nothing you could’ve told me that would’ve made me happier than to tell me that a man of your character and integrity is going to be there for my son after I’m gone,” Turner said to Swinney in a text message shortly before his passing. “I didn’t bring him here for football although that would be a bonus. I wanted him to meet you and for you to meet him. I’m not scared of dying, but not being there for my kids terrifies me. “It’s been hard on him (Nolan) – the things he’s dealt with since he was 12 years old when I told him I had ALS. He’s kind of quiet, unlike me, so I worry about him. I know many kids have much more worse circumstances. I have my hand out for nothing because I can put him through school, however, your friendship and you telling me to give him your number – priceless. I hope he gets an opportunity to play for you. He’s wanted to be a coach since he was seven years old. Thank you.”

Swinney’s reply to Turner? Worry about everything in your life except who will look after your children and in typical Dabo Swinney fashion, the answer was simple, ‘I’ve got your back.’

“Thank you KT. I’m never going to delete that text,” Swinney said in his reply to Turner. “I don’t have enough words to express my pain for you, but I do know the power and the grace and that God never says, ‘Oops or my bad.’ There are many things in life that I just can’t understand, but God paints a canvas bigger than we can see and his plan is perfect. One day your body will be healed and you will run and jump and you will have no struggles and I believe that with all of my heart. Our lives are a vapor to our creator and we will all die.

“Our purpose is to walk by God and impact other’s lives. KT, you’re an amazing person, father and example to me. Keep fighting and changing lives. Your legacy will live forever through your kids and others. Don’t ever give up. I want you to know that I’ll be there for your kids. I’ll start with Nolan and through Nolan I’ll get to Natalie and through Natalie I’ll get to Cole. Do not be burdened through that. I’ve got your back. I’ll be there for Nolan to see that he fulfills his dreams of playing and coaching. I love you, KT. You’re one of my heroes.”

With Turner now watching over his children from Heaven, Swinney will bring Nolan into his family – and the Clemson family – and do what he’s done time and time again, molding a young person into a man, and carrying out a promise he made to a friend and a brother.

“It was special, really special and it's amazing how God worked all of that out, to be honest with you,” Swinney said. “We weren't even recruiting defensive backs and then all of a sudden we have a mass exodus of defensive backs. It's just amazing because I guess I knew that the good Lord knew that Kevin's time was short and it just gave him that peace. It's just awesome that it all worked out that way. I'm excited to have the opportunity to help finish what Kevin started because he's given Nolan a great foundation. Kevin was a man's man. He really was. He lived his life no matter what. He never complained, but he was ready. It's a blessing. I hope we can all be ready like KT was when our time comes.”

That promise – to take care of young men as they transition from high school to college and boyhood to manhood – is one that Swinney can make to every parent of every recruit without hesitation.

“That's easy to do because we say what we mean and we mean what we say and that's what I love to do - develop young people and hopefully win some games along the way,” Swinney said. “The main objective is to graduate these guys and to build men through the game of football. That's my calling.”

Swinney wants to make it known, however, that Nolan is far from a charity case. The kid – like his dad – can play. He’s a fighter, and Swinney didn’t hesitate to extend an offer. He only asked one thing of Turner in return…..

“I’ve just got one favor to ask of you. If you do get to Heaven before me, maybe you can help me with a great catch, block, kick, etc. from time to time when I need it. I could’ve had some help with that onside kick,” Swinney wrote.

It’s all about family and having a little fun along the way.