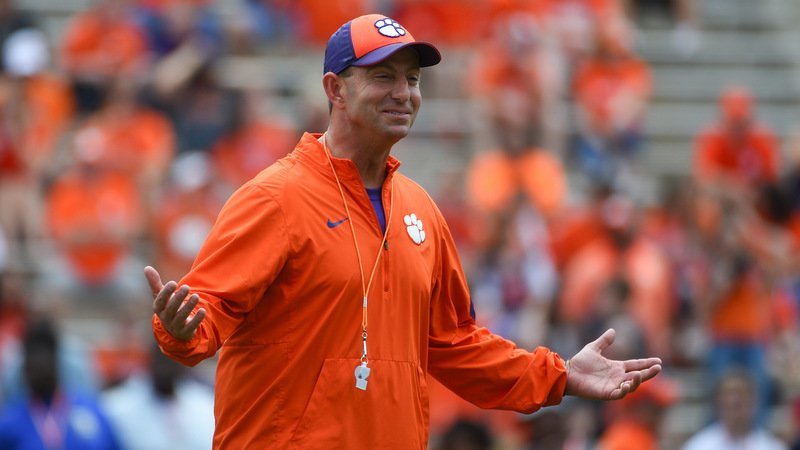 Clemson has had an unprecedented run of success under Swinney

CHARLOTTE, NC – The Clemson football program has been one of the most successful college football programs in the nation over the last decade, but that success isn’t coach-driven, it isn’t money-driven, and it isn’t driven by a win-at-all-costs attitude.

It’s driven by culture, a culture that started when head coach Dabo Swinney was hired in 2009. It’s also driven by the Why.

The numbers under Swinney’s leadership are staggering, starting with three consecutive appearances in the College Football Playoff.

*Clemson has a streak of seven consecutive seasons of 10-plus wins. That is tied for the sixth-longest streak in FBS history, and only nine programs have had a streak of at least seven 10-win seasons.

*Clemson is 82-15 over the last seven years, the second-best win total and winning percentage in college football. Forty-seven of those wins came against teams that finished the season with a winning record.

*The Tigers are 40-4 over the last three seasons. Two of those losses came in the College Football Playoff.

* A total of 183 of the 188 senior lettermen (97 percent) in Swinney’s nine full years as head coach have graduated. That includes all 24 seniors on the 2016 National Championship team and all 11 seniors on the 2017 team that reached the College Football Playoff.

That run of success had its building blocks when Swinney took over as full-time head coach in 2009.

It started with the Why.

“You know, for me, it started in '09 our first year, and it's being really driven by the why of our program: Why I coach, why we do what we do, not just what we do, how we do it, but why,” Swinney said. “And really everybody believing in that part of it. Being culture focused, being very intentional. For me, I recruit people first. I hire people first. There are no perfect people, but I think the good Lord has given me good instincts, and so we've had a certain way that we've gone about doing things.”

The reinforcement of that culture begins again with each new season.

“We start over every year, reinstall the program, reinstall the core values, the philosophy that we believe in, the why, and I just don't vary from that,” Swinney said. “And then as we have been able to build that culture over the many years now, we just nurture it every year. You develop young people. You develop leadership. We've had 196 seniors, 192 graduates. I think we've had 13 or 14 juniors leave early. Three of them are already back. Two of them have got their degree. Da'Quan Bowers is coming back this fall to finish up and work with us. It's just culture driven. That's the short answer I can give you.”

Swinney said the focus has to be on the program and the players, not just wins and losses.

“You know, the program is what I've always been focused on, not just having a good team,” he said. “From day one, we've always been program oriented, with the goal being developing a consistent winner, to one day be a team that year in and year out you just know you've got a chance. That's all you can ask for.”