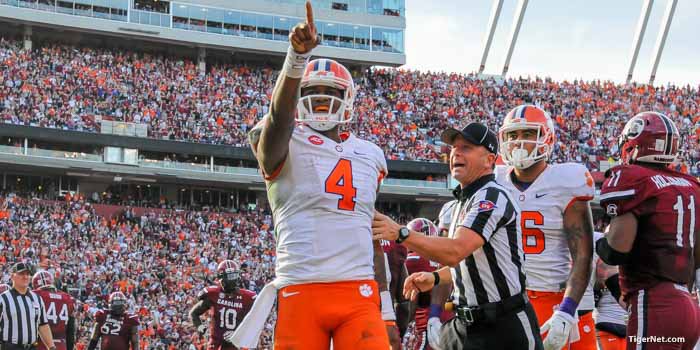 South Carolina offensive lineman Zack Bailey was recruited by Clemson, he’s been to games in Death Valley, and he thinks that while Clemson isn’t a “bad team” he knows there are teams that have “put it to” the Tigers and he thinks his Gamecocks have a shot to do just that.

Bailey is a sophomore out of Summerville High School, and he considered Clemson before choosing South Carolina. As a result, he says he knows what to expect when the teams kick off at 7:30 p.m. Saturday night in Death Valley.

“I’ve been there before – obviously, not playing – so I know what the environment is like,” Bailey said this week. “Florida didn’t really tempt me, so I don’t expect Clemson to. It’s going to be loud. Everyone knows it is. They hold a really big crowd and they have a big stadium, so it’s going to loud, but it’s nothing we can’t handle.”

The Tigers are 10-1 and ranked fourth in the College Football Playoff, but Bailey isn’t impressed.

“They are just another team. Anybody can be beaten at any time on any day,” he said. “You look at any of their past games. Not saying they’re a bad team, but there are teams that have walked in there in those same circumstances and they put it to them.”

Linebacker Chris Moody, also recruited by Clemson, says all the pressure is on Clemson and likened a win over the Tigers to “beating up your little brother.”

“They’re the big-time team right now. We just have to come out and play our ball and the rest will take care of itself,” Moody said. “We’re bowl eligible and they’re trying to get to a playoff. We don’t really have that chance right now, so it’s big for them.

“There’s always excitement when you’re playing your rival. It’s like beating up your little brother. You want to go out and play well and show them that you came to play early.”

“Their physicality. The way they get after the football and they swarm to the football. It’s going to be a challenge for us but we’re up for it,” Hurst said. “Every day before we break down meetings, it’s ‘Beat the east. Win the state.’ Since day one he (head coach Will Muschamp) has addressed it and it’s a huge game for all of the people around here.”

“There is no underdog in a rivalry game. It’s a brand new season. It’s a one-game season,” Allen-Williams said. “This is against our rival and we want this game really bad. It’s all we talk about every time we break a meeting. It’s always, ‘Beat the east. Win the state.’ We couldn’t get one of those accomplished but we’re definitely going to go out and try to get the other one this week.

“They’re in the hunt for the playoffs or whatever. Our job is go out and focus on South Carolina and if we put our style on tape and go play the way we know how to play we can do big things this weekend.”

“Yeah. I hate that song. It’s kind of an annoying song,” he said. “It’s there and they play it at the beginning of practice. I feel it’s kind of equal with Rocky Top. It’s about the same.”

Senior defensive lineman Marquavius Lewis will be matched up with Clemson’s offensive line, one that he calls a finesse group.

“They’re pretty solid up front and finesse guys,” Lewis said. “We just intend on coming out there and imposing what we do.”