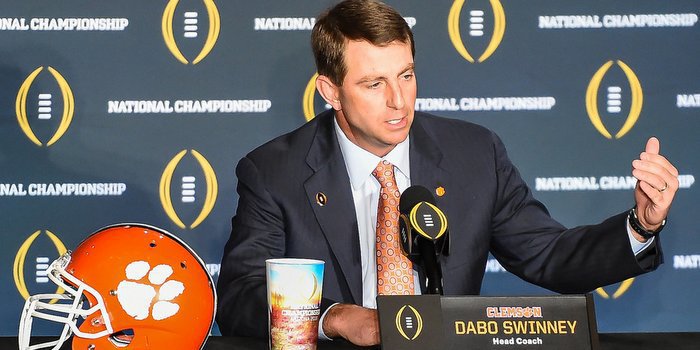 The initial 2016 College Football Playoff rankings will debut Tuesday evening, and third-ranked Clemson (AP and Coaches) is expected to be in contention for one of the top three spots.

Where will Clemson land? ESPN analyst David Pollack told the media on a conference call Monday that he expects the Tigers in the No. 2 slot behind Alabama.

"The committee really values big wins and the committee values what you've done. I think Clemson's resume now is going to warrant them being No. 2, Michigan will be No. 3, and Washington -- if this ranking came out a week ago, Louisville would have been ahead of Washington," Pollack said on a conference call today. "But Washington beat a good Utah team on the road. I think the committee will have Washington ahead."

The Wolverines have become a bit of a media darling this season, and have beaten Wisconsin (8th AP) and Colorado (21st), both contenders to win their divisions.

Clemson is the only team in the nation to have beaten three teams currently ranked in the Top 25 – Louisville (5th), Florida State (19th) and Auburn (11th), something that should catapult Clemson ahead of Michigan.

"They put a big-time premium on big wins," Pollack said.

Strength of schedule also plays a part, and the Tigers have the highest strength of schedule in the nation with a rating of 11.1. Alabama is fourth, Michigan is 19th and Washington is 38th. The Huskies have played just one team currently ranked in the Top 25, defeating 16th-ranked Utah last Saturday.

Clemson also has three wins versus ESPN’s FPI top 10 teams. Under the Football Power Index, Louisville is third, Auburn is sixth and Florida St. is tenth. No other school has more than one.

The College Football Playoff selection committee, a 12-member group that ultimately will choose the four teams to compete for the national championship, will complete a two-day meeting near Dallas by unveiling its first Top 25 of the season.

The committee will re-rank the teams each week until its top four are placed in the playoff bracket on Dec. 4.