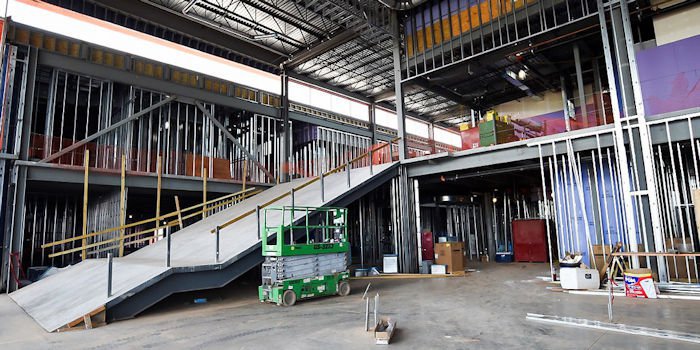 CLEMSON – The Clemson football media got a chance to take an extended tour of the new football operations complex last Saturday, and as I walked away from the construction site and into the indoor practice facility one thought kept crossing my mind.

Wow. I wish I had a nap room just down the hall from food, an arcade, a bowling alley and fire pits.

To put it simply, the new state-of-the-art football facility is a game-changer and will set the standard for similar facilities across the country. Once the 140,000 square foot facility is completed – right now it’s scheduled to open on January 26th – the rest of the country’s programs will be playing catch-up.

Thad Turnipseed, the director of recruiting and external affairs who was hired away from Alabama by head coach Dabo Swinney a few years ago, said his input into the planning came from visiting several campuses across the country and taking something special from each place.

Except the slide that will allow players and coaches to move from the second floor to the first floor. That’s all Swinney.

“We want this place to be available to our players, so Dabo (Swinney) wanted to make sure we had the best of everything,” Turnipseed said. “I’ve been fortunate enough to have been a lot of places, so I took the weight room from Alabama because I am familiar with Alabama. Tennessee might have the nicest training facility, and Oklahoma – although it’s dated – were the first ones to put the pools inside the locker room. So we put all of that in there to make it nicer, and then Dabo said to make it Clemson.

“Clemson is about family and fun, and so he came up with the slide. You can be in the team meeting rooms and come out and slide right down into the locker room.” 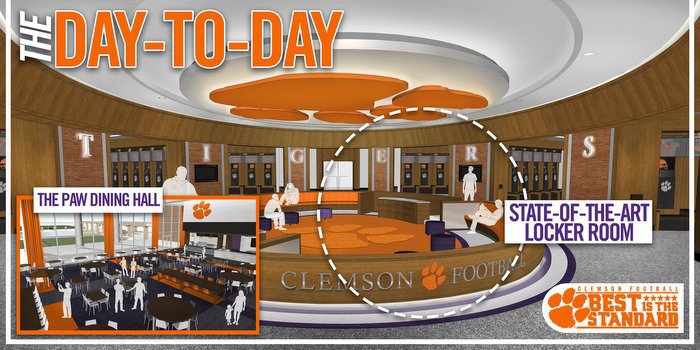 The $55 million complex is the new home of Clemson football – all of the team rooms, coach’s offices, meeting rooms and practice locker rooms will be located there and will no longer be in Memorial Stadium.

The new complex will also make an impression with recruits, something that co-offensive coordinator Jeff Scott has already seen first-hand.

“It's already been impressive taking recruits through there now with it not being finished. I think it really just elevates us up one more step, Scott said earlier this week. “We've got a great facility here with the West EndZone, but moving over there to the new football operations center is going to be incredible. It's a one of a kind facility. I think it makes a statement to everybody in the southeast and everybody in the country that at Clemson, we take our athletics very important. There's a lot of pride. Coach Swinney has had the saying around here for a while that best is the standard and that's in everything. Obviously, we're talking to our players about their attitude, effort, concentration in practice, their performance in games, their performance in the classroom, their preparation off the field, making good decisions.

“The other side of that is we want to give our players the very best that we can while they're here because they are working extremely hard and that represents the commitment that his administration, Board of Trustees, President Clements, Dan Radakovich and his staff and really the vision of Coach Swinney that we're not going to sit back and get complacent and rest and let everybody pass us up so that we can try to catch up again. I think Coach Swinney says embrace the target and we want to do the same things in the facilities. We want to be ahead of the game and be that target. There is no greater time to add those facilities than right now with the momentum that we have already. I think that's just going to take it up another notch. The response we've gotten from recruits has been great just like we expected it to be.”

Some of the highlights include:

*A players’ lounge that includes a barber shop and shoe-shine area, arcade, two-lane bowling alley and laser tag. Due to NCAA regulations, the school can’t provide haircuts or shoe shines to players, but once a week someone will be brought in and the players can pay for those services.

*The facility will also include a 24-seat HD theater and an indoor golf simulator. Turnipseed said he doubted that many of the players play golf, but mentioned that in business a lot of deals are made on the golf course and the simulator will teach them about the game. It will feature 93 of the nation’s best courses.

*There will be an indoor replica of The Hill and Howard’s Rock. This will be located at the front door of the facility, and will be accessible to fans. Fans can bring in their kids, push a button, music will play and they can run down the to-scale replica of The Hill.

*New scales allow players to enter a thumbprint (biometric scanner) and step on the scales. The scales will register the player’s name and weight and send a digital report to the coaches. Once they weigh-in, they step into the PAW dining facility, once again scan their thumb, and a detailed menu will pop up based off their weight and goals.

Their diet plan will be based on their weight. If a player is overweight, he’s more likely to be served a salad or greens. If he’s underweight, nutritional protein shakes might be on the menu or he can choose from options from the fresh bakery.

“The number one problem is lack of sleep, and right now what guys do all over the country is bring a pillow and go find a staircase or locker or hallway, and they’ll lay down and sleep, especially during two-a-days and really all year long,” Turnipseed said. “The nap room cost very little and is a great benefit.”

*A 26,000 square foot weight room that Turnipseed believes will be the largest in the country. The weight room features floor-to-ceiling glass and will overlook the indoor practice facility and practice fields. The weight room includes a cardio deck, which sits on a second level above the weights.

*Swinney’s office will have a recruiting deck where he can host recruits and their families. The deck overlooks the practice fields, but also has a view of Death Valley.

*Visiting broadcast media will have a dedicated “studio” where they can interview coaches, eat meals and even broadcast. The studio includes a green screen.

*Players can walk off the practice field and into a 60-person cold tub. The players can leave the cold tub and put their cleats and dri-fit clothes in a specialized drying room before entering the locker room. There are also workout tubs (resistance training for injured players) and a lap pool.

*Laundry facilities will be on-site for players who get behind on laundering their clothes. 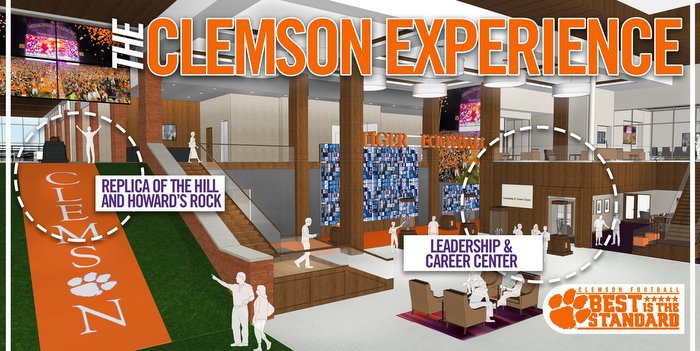 A rendering of The Hill

*One of Turnipseed’s favorite parts of the facility is a covered outdoor basketball court that will also serve as a multi-purpose facility, which will be ideal for hosting coaches’ clinics.

*There is a special section devoted to Jeff Davis and the PAW Journey. The Journey will feature the success of Clemson athletes beyond football and includes successes in life and business.

*There is an outdoor village with basketball, putt putt and seating areas, outdoor fire pits and outdoor grills. Players can bring in food, sign in one guest, and have a cookout.