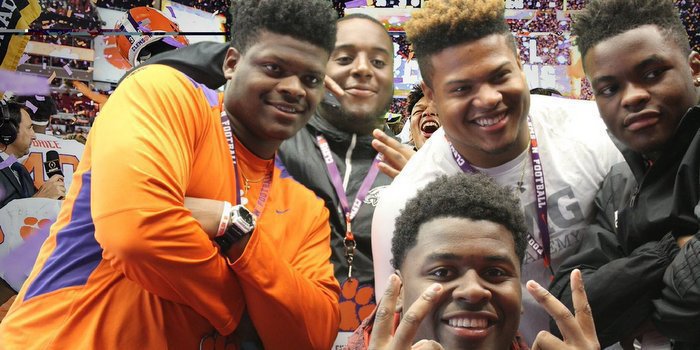 Clemson linebacker commit Mike Jones, Jr., made the trip to Clemson this past weekend with a carload of his IMG teammates, and the quintet was treated to the first true look at Clemson’s new football operations center.

Jones, a 4-star prospect out of Bradenton (FL) IMG, became the first commitment of the 2018 recruiting cycle when he gave his verbal to the Clemson coaches last June. Since that time, Jones has been a tireless recruiter on Clemson’s behalf and he and his dad brought a group that included five-star defensive end Xavier Thomas and five-star defensive tackle Taron Vincent, 4-star defensive lineman Stephon Wynn and 3-star T.K. Chimedza.

Jones told TigerNet Monday it was important to spend such an important weekend with his teammates because he wants to play with each of them on the next level.

“Of course. I want to be able to play with guys,” Jones said. “Things went really well for me and my guys. My dad drove us up there and it was a great experience to go with my friends. We already know the coaches, but it was great to see what it would be like if we all went to the same school. It was a great thing to do with my friends.”

Jones said he had two highlights from the new facility.

Jones laughed when describing the slide and its speed.

“When you go down the slide, you are going to go faster than you think. It's faster than it looks,” Jones said. “T.K. fell, Coach Todd (Bates) almost fell and Coach V (defensive coordinator Brent Venables) almost fell. You have to be ready for how fast it is. It has deceptive speed. That is going to be so cool. You will have a bunch of football players jumping around and wanting to go down it. I can't wait to experience it myself.”

The early returns are that the new facility has a chef who can cook almost anything, and Jones said the dining room was also a highlight.

“Yes, yes, yes,” he said. “They have this big old dining area right beside the player's lounge and we had a whole bunch of grilled food like burgers and wings and stuff like that. It was so good.”

The group worked off their lunch by playing a game of basketball on the new courts and a few of the other amenities.

“We all played basketball. None of us went on the putt-putt course because none of us are very good at golf, so we all tried to shoot hoops,” Jones said. “Out of my little group of guys, I am the best. We went in the nap room and laid down for a good little bit. That was awesome. But my favorite thing is the slide. It's the slide, 100 percent.”

The final piece of the weekend was a visit with Venables.

“He talked about how proud he is of me and how I hold on to the term commitment, because I don't go and visit a bunch of other schools like a bunch of these guys are these days,” Jones said. “He says he is proud of me being a leader at my school here.”